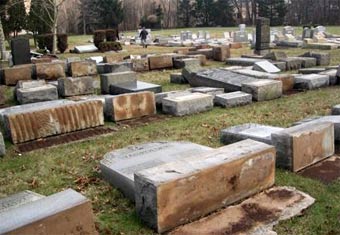 A week and a half ago, hundreds of headstones at the Poile Zedek Cemetery in New Brunswick, NJ were toppled over, raising concerns that the Jewish cemetery had been targeted in a possible hate crime. Yesterday, when four teens, a 15-year-old, two 16-year-olds, and a 17-year-old, were arrested, Middlesex County Prosecutor Bruce Kaplan said that the investigation so far did not suggest this "was an attempt to intimidate, target or harm the Jewish community."

The Star-Ledger had a straightforwardly depressing explanation of the events:

Authorities said three of the teens first struck on New Year's Day, toppling 17 headstones. Three days later, they re turned with the fourth friend and systematically upended row after row of the granite stones, some weighing more than a ton. Kaplan said it took the teens up to four hours to complete the desecration.

When it was done, 499 stones, many of them cracked or broken, littered the cemetery's gently sloping grounds off Joyce Kilmer Avenue.

It may cost hundreds of thousands of dollars to repair the gravestones, leading to the creation of a Cemetery Restoration fund. Congregation Poile Zedek' s Rabbi Abraham Mykoff said, "We have some solace in the fact that they were apprehended, and moved by the support and empathy we've received from Jews, Christians and Muslims."

The teens are in a juvenile detention facility; each was charged with "criminal mischief, desecration of venerated objects and conspiracy to commit desecration." And here's an audio slideshow of the damage - it's pretty disturbing.