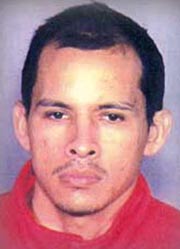 A month after a jury found Cesar Rodriguez guilty of manslaughter in the brutal death of his 7-year-old stepdaughter NIxzmary Brown, a judge sentenced him to the maximum allowed, 26 /12 years to 29 years in jail. He told the court, "I loved Nixzmary...I can honestly say that I’m being accused of something I did not do...but I will take responsibility."

Brooklyn Supreme Court Justice Priscilla Hall had to scold courtroom spectators who cheered after her verdict. The little girl had been starved, tortured, tied to a chair, and made to use a litter box during her short life by Rodriguez, but his lawyer claimed the final, fatal blow that killed her in January 2006 was dealt by her mother (who faces trial this summer). While his client was found not guilty of second-degree murder, Jeffrey Schwartz vowed to appeal.

Five jurors were present for the verdict. One, Barbara Burns, told Newsday, "He should have gotten life," while another, Janice Richardson said, "Great. I wish it could have been more."

#Cesar Rodriguez
#child abuse
#defense
#nixzmary brown
#sentence
Do you know the scoop? Comment below or Send us a Tip