Nixzmary Juror: "We Just Wanted Justice for the Little Girl" 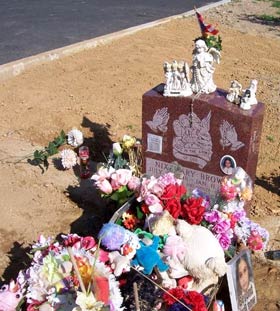 Jurors in the harrowing Nixzmary Brown trial say they were divided over handing down a murder verdict, so instead they found Cesar Rodriguez guilty of first-degree manslaughter, as well as "endangering the welfare of the child and criminal possession of a weapon, including a belt used to beat Nixzmary."

The Brooklyn DA's office argued 29-year-old Rodriguez's abusive actions amounted to second-degree murder in the death of his 7-year-old stepdaughter, but one juror told the Daily News though Rodriguez was "a clear abuser and a bastard...The prosecution never proved to me he didn't care if Nixzmary lived or died." Another juror said Nixzmary's mother, Nixzaliz Santiago who will face a separate trial, "is more guilty than Cesar is."

However another juror disagreed, telling the Post she wanted a murder verdict, "It a takes a malicious, vicious, wicked person to do all those things." But the jurors, exhausted from the 40-day trial, agreed to compromise. Juror Terrence Cobwell said, "We would have liked to have upped the charge, but the prosecutor didn't give us enough. We just wanted justice for the little girl."

Nixzmary's death shocked the city, what with descriptions of her being beaten, starved, tied to a chair and even forced to use a litter box and the revelations her teachers had contacted the Administration for Children's Services about possible abuse numerous times. ACS workers failed to investigate the matter thoroughly, and Mayor Bloomberg even admitted the city failed her. Prosecutor Ama Dwimoh said, "I am grateful they are holding him accountable for the death of Nixzmary Brown."

Though defense lawyer Jeffrey Schwartz managed to get Rodriguez acquitted of second-degree murder (the defense emphasized Santiago dealt the final, fatal blow), he complained the prosecution kept evidence from him, "I think it is unconscionable that the district attorney cheated." Schwartz also said Rodriguez thanked him for his work.