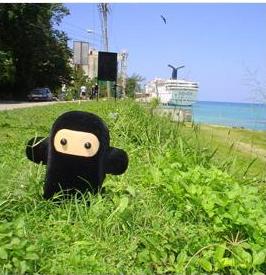 Holy nunchuks! The Staten Island Advance reports "the NYPD has quietly closed the book on Staten Island's so-called Ninja Burglar case, after authorities started deportation proceedings against at least one Albanian man they believe to be connected to the string of break-ins."

Before you wonder, "Hmm, should this have been called the 'Vampire Burglar' case?", please bear in mind that the Staten Island thief who was linked to nineteen separate burglaries typically wore a black costume, allegedly had nunchuks and was called a Ninja by a victim who saw him face-to-face. It's unclear if the Ninja costume had an Albanian flag on it.

According to the Advance, the police learned of the Albanian connection "when they learned that several men from the same area of Albania had formed a loosely knit crew to commit burglaries." And apparently they would wait for their fellow Albanian immigrants to "go out for cultural events, then strike their vacant homes."

NYPD Deputy Commissioner of Public Information Paul Browne said, "Investigators believe than an individual suspected (but with insufficient evidence to make an arrest) of being the burglar is among three Albanian nationals currently facing deportation because of their illegal status in the United States."

#burglary
#crime
#ninja burglar
#nypd
#robbery
#staten island
Do you know the scoop? Comment below or Send us a Tip