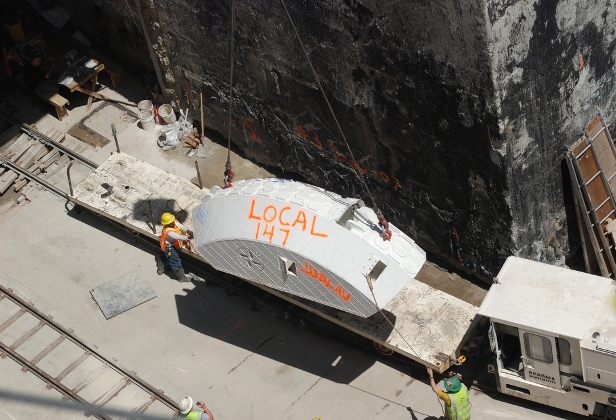 Yesterday, the MTA lowered the first of many parts of the Tunnel Boring Machine into the lower level of the 63rd Street tunnel as part of the MTA’s East Side Access project. The lowering itself could have been dismissed by passersby as just some sort of generic routine construction work, but it was much more than just moving a boring machine. When finally assembled in about two months, the 600-ton automated Spanish-owned and Italian-made machine will dig its way beneath the streets of Manhattan the tunnel that will finally bring the Long Island Rail Road into Grand Central Terminal.

The 63rd Street Tunnel itself began in 1969 with the plan for trains from the IND Queens Boulevard line to use the upper level hooking into the 6th Avenue IND in Manhattan, while the LIRR would use the lower level. The tunnel was completed in 1976, then laid dormant until 1989 when a short stub of the F train service was added serving Lexington Avenue–63rd Street, Roosevelt Island and 21st Street-Queensbridge. Finally in 2001, the F train was linked into the Queens Boulevard line after over thirty years on the drawing board. By the time LIRR trains start rolling through the tunnel will be over forty years old.

Later this summer, work on the 3.5 mile long tunnel under Manhattan will be going on 24 hours a day and the vibration from the digging will be monitored since they will be digging through hard rock. One thing we don’t know is where the material dug out will go, since that is up to the contractor. It is a pretty safe bet that it won’t be dumped into the Hudson or East Rivers to create more land for Manhattan as was done with part subway tunneling (the debris will probably wind up in a landfill instead).

According to the president of MTA Capital Construction Mysore L. Nagaraja, the whole East Side Access project for the LIRR will give a 50% increase in capacity for the railroad and can shave twenty minutes off the commute when finished in about 2013. The cost for all this is a pretty steep $6.8 billion, with money coming from the federal and state governments, not including the original cost of building the 63rd Street tunnel in the 1960s.

Two fun facts: When witnessing the lowering of the machines, there was a safety briefing that was pretty much wear a hard hat, eye protection, and an orange vest - and don't fall in the big hole. And the Tunnel Boring Machines will probably be left underground.