Newsweek To End Print Edition On Dec. 31, Will Start All-Digital Edition In 2013 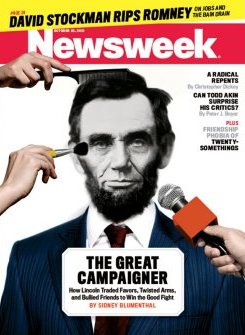 In a piece published online at The Daily Beast—which merged with Newsweek in 2010—Brown and Daily Beast CEO Baba Shetty acknowledged that the business "has been increasingly affected by the challenging print advertising environment, while Newsweek’s online and e-reader content has built a rapidly growing audience through the Apple, Kindle, Zinio and Nook stores as well as on The Daily Beast."

It is important that we underscore what this digital transition means and, as importantly, what it does not. We are transitioning Newsweek, not saying goodbye to it. We remain committed to Newsweek and to the journalism that it represents. This decision is not about the quality of the brand or the journalism—that is as powerful as ever. It is about the challenging economics of print publishing and distribution...

Exiting print is an extremely difficult moment for all of us who love the romance of print and the unique weekly camaraderie of those hectic hours before the close on Friday night. But as we head for the 80th anniversary of Newsweek next year we must sustain the journalism that gives the magazine its purpose—and embrace the all-digital future.

Job cuts are expected, but it's unclear how deep they will be. There is an internal meeting to announce the news at 11 a.m.

Barry Diller, the IAC mogul, owns The Daily Beast, and his company took control of Newsweek earlier this year from the family of billionaire Sidney Harman (who bought Newsweek in 2010 and died in 2011).

In a July article about that move, Reuters gave some backstory, "Barry Diller launched The Daily Beast under the auspices of former New Yorker and Vanity Fair editor Tina Brown in October 2008. The presence of Brown, coupled with an emphasis on political coverage that dovetailed with the election of U.S. President Barack Obama one month later, allowed The Daily Beast to immediately establish a brand and build an audience. But advertising sales never caught up with the buzz, and media reports have estimated losses at The Daily Beast at around $10 million annually." Embrace the romance of digital!

#Barry Diller
#newsweek
#online
#print is dead
#the daily beast
#tina brown
Do you know the scoop? Comment below or Send us a Tip