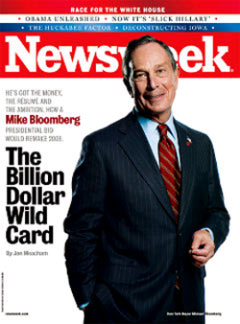 For an avowed non-presidential candidate, Mayor Bloomberg certainly gets more attention than some of the actual candidates. Newsweek devotes its cover story to "Mike" Bloomberg, "The Billion Dollar Wild Card," a reference to the billion dollars Mayor B has at his disposal, should be decide to run for president next year. That is so much more flattering than the "Lazy Like a Fox" cover Newsweek had of Fred Thompson!

Newsweek editor-in-chief Jon Meacham got to travel with Bloomberg (on Bloomberg's private jet) as he flew from Washington DC to Seattle to discuss topics broader than NYC issues. Meacham's letter from the editor notes that skeptics are becoming believers about a Bloomberg candidacy. And Bloomberg himself says:

I think there's much too much partisanship. I've been a Democrat, I've been a Republican, and now I'm an independent … You'll find despicable people and brilliant, philanthropic patriots in both parties. What we have to do is we have to pick the best out of both parties and pull them together instead of having this partisanship where it's either-or. That's what this country is suffering from.

No arguments there, but it has been pretty opportunistic of Bloomberg to party switch - billions can embolden anyone.

Other tidbits about Bloomberg: He loves Longfellow's "Paul Revere's Ride," he doesn't really comment about allegations he's been cruel to female employees (he just says he's matured), and still claims he doesn't want to run for president - he just wants to serve out his second term as mayor and devote his time to philanthropy. But that might all change on March 5, after the Texas primary: Bloomberg's chief political adviser Kevin Sheekey thinks there may be opening for Bloomberg and says getting on all the ballots is "something you can do with resources."

Finally, we can't resist this Meacham analogy: "If Rudy Giuliani is Batman, a dramatic caped crusader, then Mike Bloomberg is Bruce Wayne, a more buttoned-down but effective force for philanthropy and centrist public policy." Who is Hillary Clinton then?