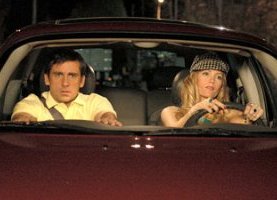 Nassau County's unusual decision to release the names and photographs of everyone arrested for DWI over the Memorial Day weekend was both hailed and decried. Nassau County Executive Thomas Suozzi was moved to post the details and asked media outlets to run the information after a drunk driver plowed into a police cruiser--the police officer, who had just pulled over another drunk driver, was critically injured.

"She had heard on the news that they were going to take pictures and put them in the paper," Moyer said of the Nassau County Wall of Shame.

But after she met friends at an East Meadow bar and began drinking screwdrivers, her mother's warning about the new Nassau policy "didn't cross my mind."

She ate breakfast at the bar and left when it closed at 4 a.m. Sunday. A few blocks away, she saw the flashing lights of a police car in her rearview mirror and ended up with her first DWI arrest.

Moyer is worried about her job, but did say, "I might have to take a cab next time so it won't happen again or just don't drink any liquor."

One arrestee was more upset about being kept in a holding cell for so long, but thought it was fair to publicize the arrests, since he was drinking and driving. Another, who said people made fun of him on his MySpace and Facebook pages, is considering a lawsuit.