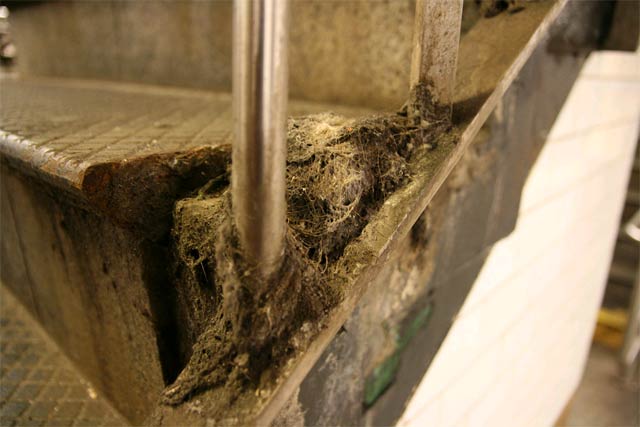 Photograph of a West 72nd Street subway stair hairball by Joe Schumacher on Flickr; the hairball has been there for 3 years and counting.

Okay, maybe it's not a news flash, but New York City Transit Riders Council has put it on paper--61 pages to be exact (PDF)--as it reported that many stations are in need of a lot of cleaning and care. The NY Times noted that the worst conditions at some included "water damage, exposed wires, rodents, foul odors, clogged track drains and general filth."

The group surveyed 50 stations on 34 measures; per the Daily News, "Eight stations failed, with overall grades below 70. Another 15 stations passed with grades between 70 and 80 - but still need much help." Also embarrassing is that two failing stations--Jay Street-Borough Hall in Brooklyn and 138th St-Grand Concourse in the Bronx-- are in the city's so-called economic development zones, allowing the report to blame the city for not helping with subway station maintenance.

The most run-down stations are Beach 90th Street A station in Queens and the Bronx's 149th Street-Grand Concourse 4 and 138th Street-Grand Concourse 4 and 5 stations. The Post reported that the 149th St-Grand Concourse station, the setting for the Riders' Council press conference, recently got "a suspiciously timed fresh coat of paint"--the group's president Andrew Albert said, "Maybe we should announce these every few days and it will get the system cleaned and repaired." Of course, this comes as the MTA faces severe budget shortfalls and plans to delay station improvements. Good times.