Disturbing new photos show a pile-on fight in front of the Charleston bar in Williamsburg early on the morning of June 14th, one of a series of altercations that left 33-year-old Michael Sapp dead. The photos, provided to Gothamist by photographer Sean O'Neill, show Sapp knocked to the ground, angry men looming over him, and in one, Sapp standing, dazed, facing a crowd.

O'Neill said he was walking down Bedford Avenue that night, headed to a party around midnight, when he came across the melee in progress, and that he stopped for just a few minutes to photograph it before carrying on. He said he didn't pay close attention to what people were saying, or who was who, but that about 30 people were gathered outside the bar, 10 of them involved in a "free-for-all." Some focused their aggression on Sapp, while others shoved and threw one another, and at least one, a stocky man in a white shirt, tried to pull people off of him, O'Neill said.

"I was just kind of focused on taking good pictures of the street fight," he said. "I wasn't concerned with what I saw." 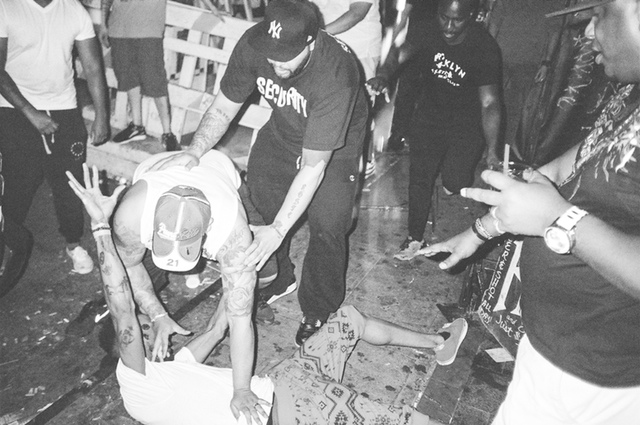 Michael Sapp struggles on the ground as a bouncer appears to try to pull off the man in the white tank-top. In later photos the man's shirt appears shredded. (Sean O'Neill)

"I didn’t see anything that was a definitive blow," O'Neill said in a follow-up conversation. "You know those bar brawls that are just a bunch of people in a big pile? It was more like that than anything."

Based on previous witness and police accounts, the photos seem like they were shot after a man, apparently someone other than Sapp, was knocked out in front of the bar, and after a bouncer ejected Sapp. Sapp later returned to the sidewalk outside the bar and threatened to "kill everybody," according to one bystander. O'Neill said though he didn't see Sapp hit anyone, "he was definitely being an aggressor, but like unconsciously." Citing past experiences as a boxer, O'Neill said that, based on Sapp's body language, he believed Sapp was "standing unconscious," and though he "was walking and talking shit," he didn't know what was going on. 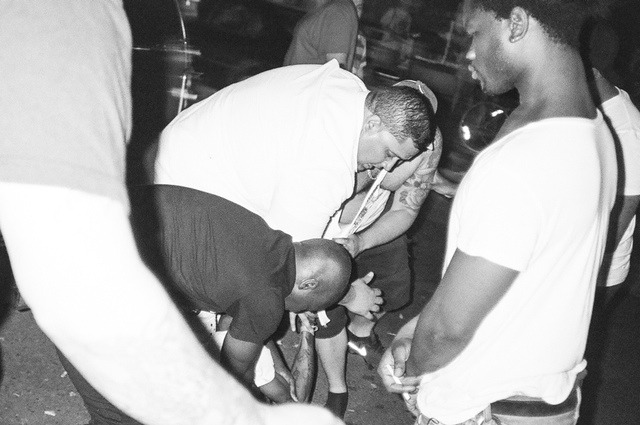 Science, and the investigation so far, may back this theory up. Police have said that Sapp was in "several fights" over the course of more than an hour. The medical examiner, which completed its autopsy on Thursday, ruled his death a homicide and told Sapp's sister, Ampora Yazdani, that the cause of his death was multiple blunt force trauma to the head. An article written for MIT's graduate science writing program explains how a boxer can fight while unconscious:

A TKO, or technical knockout, can actually happen while the boxer's still standing. He could look conscious, even continue to defend himself, and be knocked out. In this case, the violent movement of having been punched will have caused small brain tissue and artery tears, and the more times a boxer gets hit rapidly, the faster those tiny injuries happen. If a boxer's brain chemistry is going crazy trying to re-regulate its balance of electrolytes and store enough energy to repair damaged neurons, the boxer could briefly lose consciousness and receive a technical knockout. Usually, the fighter will drop his hands or present some lethargic sign that indicates the blackout to the referee.

"After a brain injury, the heart must supply sufficient blood flow for the brain to repair itself. If the demand outweighs the supply, the brain then shuts down and leads to an eventual loss of consciousness. That's when I know to end the match, because if we keep going the fighter is going to die," quoted neurologist and ringside physician Anthony Alessi in a July article on boxing in Popular Mechanics.

O'Neill is a fine art photographer and was shooting with black-and-white film, so he didn't get the photos back until a week after the fight, and it was only later, when showing them to a friend, that he heard the man in the center of his snaps had died. He said he has been debating what to do with the photos, but that he now plans to share them with law enforcement. 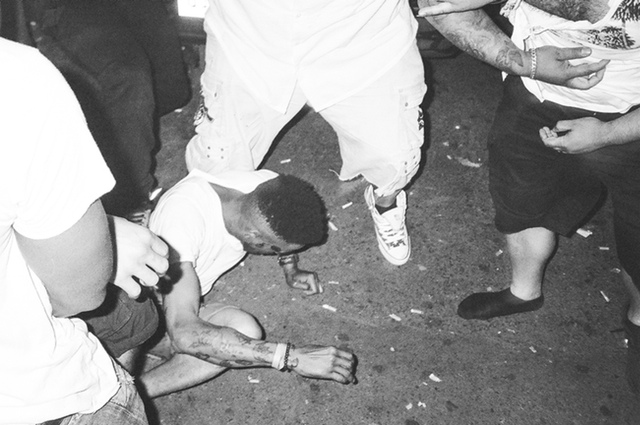 It has been 24 days since paramedics drove Sapp to Bellevue Hospital in critical condition and 22 days since doctors disconnected him from life support. Police have not named a suspect or issued a media request for information about his killing.

Sapp's sister Yazdani is frustrated with the pace of the investigation. She said that police actually had a suspect in custody at one point, but released him without charges. Now, she said, detectives are considering the blows that killed Sapp self-defense, meaning the most anyone could spend in prison would be a year on a misdemeanor assault charge. A detective told her that Sapp at one point told people he had a gun, but given that he was wearing a T-shirt and gym shorts that night, carrying only a plastic shopping bag, she wonders how anybody could have believed it.

"Where would he have had the gun?" she said. "In the plastic bag?"

Yazdani said prosecutors are unsatisfied with the detectives' theory, and she has been coordinating with friends of her brother's to canvass the neighborhood with flyers seeking more witnesses. One onlooker described the crowd outside the bar looking away after a man stormed out of the bar and "broke [Sapp's] face," then, once the attacker had left, pulling out their phones to record Sapp coughing up blood. Yazdani believes that the police narrative of that night—that officers responding to a 12:15 am 911 call found Sapp and he refused medical attention, then responded again at 1:30 when he was being treated by paramedics—points to negligence by officers. She thinks that could explain the reluctance to pursue murder charges.

"Considering what the medical examiner is saying, the city may be at fault for what they did in the line of duty," she said.

Sapp and Yazdani were orphaned as children, and a former girlfriend said that he never came to terms with the loss of his mother. He had moved back to New York from Los Angeles last August to be near his teenage daughter, and though he had a steady job, he was homeless and struggling with alcoholism. In Yazdani's view, nothing Sapp said that night last month could justify him being murdered in front of a crowd of people.

"My brother didn't have it all together, but he didn't deserve to have the hope of a better future taken away because he's a loudmouth," she said. "He dealt with a lot of problems growing up that other people didn't have to. That doesn't excuse anything, but it also doesn't mean he needed to die."