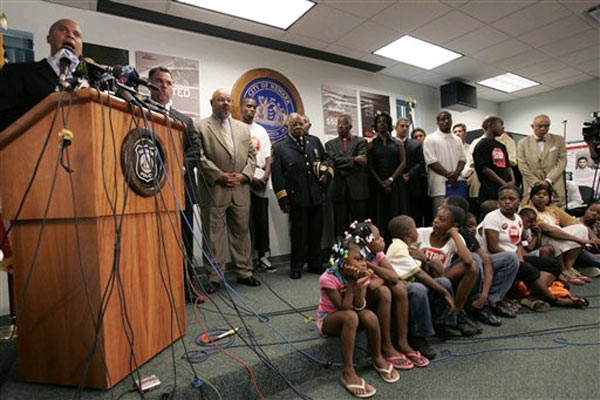 Mayor Cory Booker unveiled new technology to help fight crime in Newark. The plan is called "Community Eye," and it will "marry audio gunshot-detection technology with a series of remote-control public surveillance cameras into a network," according to the Star-Ledger. Booker hopes to put 100 cameras and audio gunshot-detection machines to work, as the Newark Community Foundation has promised to raise $3.2 million for the effort. Booker said, "When all the cameras and gunshot detectors are up, we will have about 8 square miles of the city covered."

The detectors will be able to differentiate between gunshots and engines backfiring, as well as alert police immediately for faster response times. Newark police director Garry MacCarthy said, "I kind of feel like a kid on Christmas morning."

Community Eye has been in the works for months, but took on a greater meaning in the wake of the execution-style shooting of four young Newark residents which left three dead. The Newark police are continuing their manhunt for more suspects, as three of six suspects are currently in custody. There is much attention about how the suspects may have been involved in the gang MS-13, which has roots in Central America. While police and prosecutors are trying to downplay the gang connection, two of the suspects had MySpace pages mentioning the gang. Assistant Essex County Prosecutor Thomas McTigue explained most Newark gang violence is related to the Bloods and the Crips.

The NY Times has an article that details the lives of the suspects, a "mixed band of men and boys" whose violent behavior scared residents of an apartment complex in a middle-class Newark neighborhood. It's also believed that one of the principal suspects, Jose Lachira Larranza, shot at least one of the victims, while another 18-year-old (who investigators are still looking for) may have been one of the other shooters.

NJ Governor Jon Corzine visited long survivor Natasha Aerial in the hospital yesterday. He praising her courage and later visited the schoolyard where her brother, Terrance, and two friends, Iofemi Hightower and Dashon Harvey, were killed.