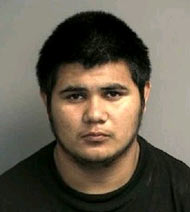 Early yesterday morning, Newark authorities arrested the sixth and last suspect in the schoolyard shootings of four Newark residents that left three dead. Eighteen -year-old Melvin Jovel was arrested in Elizabeth, NJ at his family's home. He surrendered and is now being held on $2 million bail. Newark Mayor Cory Booker said, "Through collaboration with the Essex County Prosecutor's Office, the final suspect in this heinous crime has been arrested and the city is grateful. Now the process of healing must take center stage and the prosecution of the case begins."

Clues about Jovel's whereabouts reportedly came from information detectives got during the arrests of two other suspects in Maryland and Virginia just 26 hours earlier. The NY Times reports that Jovel, a Honduran immigrant, recently turned 18 and had no criminal record as an adult. While authorities have been quick to downplay any connection to gang violence, the Star-Ledger reports that a "former classmate of Jovel's said he associated himself with the gang, and a MySpace page maintained by a Melvin Jovel of Newark had a picture of two forearms with gang tattoos."

Two other suspects, 28-year-old Jose Lachira Carranza and 24-year-old Rodolfo Godinez, are considered the principal players in the killings of 18-year-old Terrance Aerial, 20-year-old Iofemi Hightower, and 20-year-old Dashon Harvey and the attempted murder of 19-year-old Natasha Aerial. Carranza and Godinez had also been out on bail for other violent crimes. The three other suspects include two 15-year-olds and Godinez's 16-year-old half-brother.

The Star-Ledger also looks at how residents are wondering what is next for their community. The four victims were in college or headed there, and Bethany Baptist Church's Reverend M. William Howard Jr. said, "We were hit squarely in the face with the erroneous assumption that, if you do all the right things as a young person, you can escape the madness. We've had that assumption exploded and realize violence is simply out of control and spilling into the life of ordinary people more than we realize."