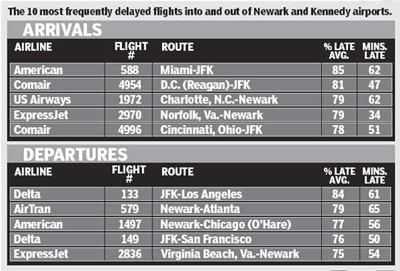 It should come as no surprise, but New York's three major airports Laguardia, JFK, and Newark (in New Jersey) are the worst in the nation when it comes to on-time performance. The New York Post compiled a list of the ten worst flights when it comes to leaving or arriving in a timely manner. The absolute worst is Flight #588 from Miami to JFK, which fails to arrive on schedule 85% of the time, with an average delay of 62 minutes. The Post spoke to a number of late-arriving passengers who listed sick crew members, foul weather, and mechanical problems as reasons their flights were constantly behind. One man would have none of it though: "[the excuses] are not credible."

A report released this May indicated that delays at area airports are getting dramatically worse. Delays at JFK increased 141% between April 2006 and April 2007. U.S. Senator from New York, Charles Schumer, has been railing against the sorry state of affairs at New York's major three for a few years. He's demanding an overhaul of the technological infrastructure that is behind air traffic control. The Senator even called for the resignation of FAA chief Marion Blakely, saying that it was her fault things were so bad. It probably doesn't help that air traffic controllers are working under conditions they consider unfavorable.