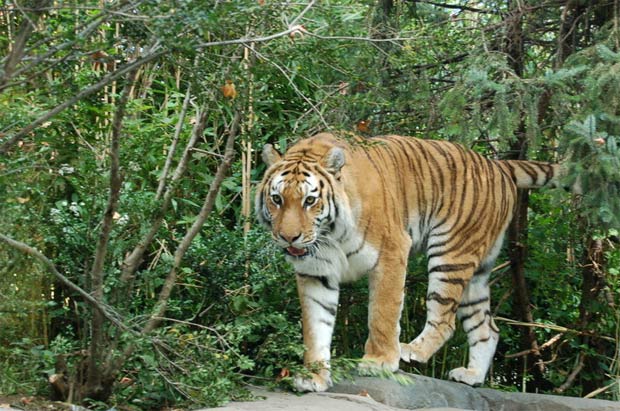 In the wake of the horrific tiger escape resulting in one death and two injuries at the San Francisco Zoo, zoos around the country are examining their tiger exhibit set-ups. Tiger Mountain at the Bronx Zoo has the following set-up, per the Post:

Tiger Mountain is surrounded by a moat about 10 feet wide and is enclosed by a fence that is 15 feet high and has a five-foot overhang. That means that the last five feet slant inward.

Inside the big fence is a smaller three- to five-foot electrified fence.

Foot-long green stakes are driven into the ground on the tigers' side of the fence. Protruding from the tops of the stakes are silver wires that fold over and look like mushrooms.

The wires will give an inquisitive tiger a high-voltage zap.

The zap doesn't hurt the tigers. And visitors at the zoo were confident they were safe from the tigers, as one Brooklynite said, "I would be a lot more worried about my neighbors having all sorts of weird animals, or even dogs that their owners don’t control." Flashback to 2003, when a 400-pound tiger was found in Antoine Yates' Harlem apartment (along with an alligator).

It turns out that San Francisco's zoo fence, originally reported to be 20 feet tall (and surrounded by a moat), is actually 12.5 feet tall, shorter than what experts recommend. The SF Zoo's 350-pound Siberian tiger Tatiana is believed to have jumped over the fence (there's some talk that the tiger was taunted, though the victim's mother disputes that) before attacking Carlos Sousa Jr., Paul Dhaliwal and Kulbir Dhaliwal. And some news reports say Sousa tried to distract the tiger from the Dhaliwal brothers, only to have his neck fatally slashed. (Tatiana was shot to death by police responding to the scene.)

PETA says the San Francisco Zoo should shut down its tiger exhibit, noting that the zoo shut down its elephant exhibit in 2004. And in 2004, a tiger got loose from the Cole Brothers Circus. It was wandering along the Jackie Robinson Highway in Queens; the circus was slapped with a health code summons.