New Yorkers Get More Leverage To Go After Bad Cops, But Will They Use It?

This morning the Civilian Complaint Review Board held a public hearing regarding the rules proposed this spring that give it the power, for the first time, to discipline and prosecute NYPD officers accused of wrongdoing. While the expansion of the CCRB's authority should further empower the public to report police misconduct, the general public had little stake in today's meeting—of the 25 people who attended the weekday hearing, none were members of the public unaffiliated with a public interest group, the city, the media, or the NYPD.

Chris Dunn, the associate legal director for the NYCLU, testified that the rules were "terrific" and "a good step in the right direction," but criticized the fact that NYPD Commissioner Ray Kelly would continue to determine whether or not to enact the CCRB's rulings, and noted that his office "receives plenty of complaints about [CCRB complainants] being disconnected from the CCRB" after their complaints have been filed.

Combine this lack of outreach with the findings of a study [PDF] showing that from 2002 to 2010, 92% of the recommendations made by the CCRB regarding to substantiated cases of police misconduct were not followed by the NYPD, and it's easy to see why the public hasn't been eager to take their case to the CCRB, let alone show up to testify at an arcane hearing in the middle of a workday.

Dunn wasn't surprised by the sparse attendance. Given that it's tough to have the public show up to a hearing about MTA fare increases, he shouldn't be. "How would people know about it?" he asked. 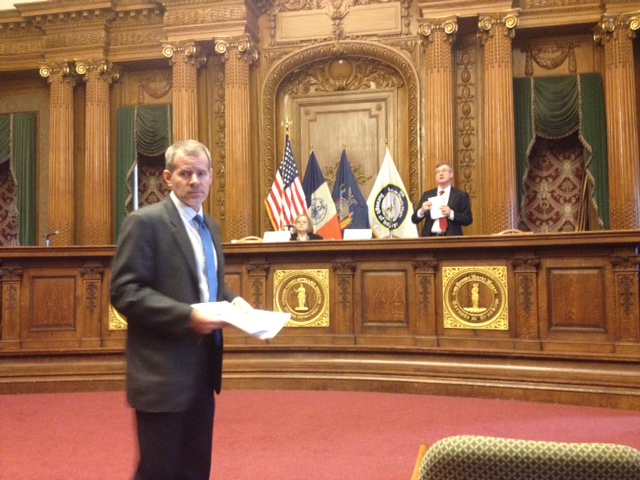 Dunn was one of three people spoke at the hearing: Graham Daw, an attorney and the CCRB's director of intergovernmental and legal affairs, apologized for the change of venue (the CCRB's headquarters at 40 Rector Street are undergoing repairs from hurricane damage until mid-January) and read a brief opening statement off an iPad.

Alex Camarda, the director of public policy and advocacy of Citizens Union of the City of New York, criticized the fact that the rules allow the NYPD or CCRB, for "frequent reasons" (which are also unnamed) to expedite complaints against officers. Carmarda also noted the lack of any requirements in the rules for the CCRB to provide semi-annual reports to the public regarding the outcome of its administrative prosecutions, perhaps addressing another way in which the CCRB is somewhat disconnected from the people it's supposed to serve.

The City is excellent at reminding us to notify authorities about an errant duffel bag on the subway, and to stop getting fat on junk food, so why can't they remind us that there is a taxpayer-funded agency available to deal with instances of police misconduct? "We want people to know who we are, what we do, and how easy it is to file a complaint for police misconduct," the CCRB's director of communications Linda Sachs told us. Sachs points to the CCRB's outreach team, which speaks to community groups, public schools, and NYCHA housing residents about the agency's role, and adds that residents can file a complaint online, by mail, or over the phone by calling 311.

Around 35 minutes after the hearing began, Daw and Susan Petito, the assistant commissioner for intergovernmental affairs for the NYPD, had no questions for two men who testified. No one else was scheduled to speak to Daw and Petito. They waited for an hour and a half for any public testimony. No one came.

You can read the proposed rule changes below: