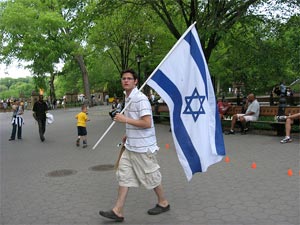 Yesterday's Israel Day Parade along Fifth Avenue attracted thousands of people during this 60th anniversary of Israel's founding. One parade watcher told the AP, "It's important to show our solidarity with the only Democratic state in the Mideast."

Mayor Bloomberg, NY Governor David Paterson and NJ Governor Jon Corzine were at the head of the parade, which included floats, performers, and students from yeshivas and Jewish day schools. Cheers of "We've come along way!" were also heard in what's considered the "largest Jewish community parade in the world."

This year, parade organizers made an effort to reach out to the area's Israeli immigrant community, noting the event may have been perceived as an American Jewish celebration. Well, as one woman, who was watching her 13-year-old son march and ran into childhood friends, put it, "Everybody's kvelling over everyone else's kids. It's a big social event."

#fifth avenue
#israel
#israel day parade
#parade
#revelry
Do you know the scoop? Comment below or Send us a Tip
A new Gothamist is coming! We’ve moved comments over to our beta site. Click here to join the conversation and get a preview of our new website.