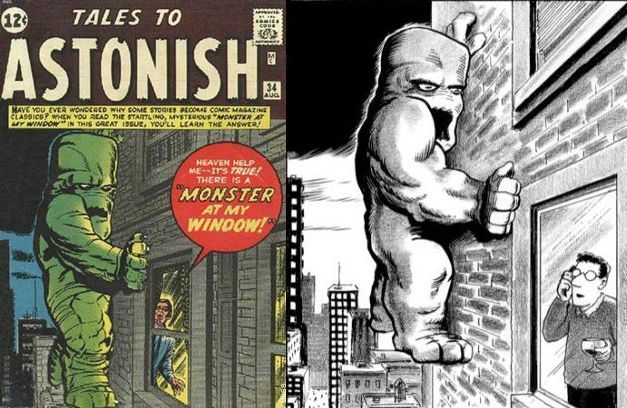 Cartoonist Harry Bliss has been drawn into a bit of controversy over at the New Yorker because his illustration for last week’s cartoon caption contest (right) is the spitting image of a Marvel comic book cover from 1962 (left). Bliss’s editors were seemingly unaware of the resemblance, and no credit was given to the original, inked by Jack Kirby and Dick Ayers. And yes, life is now imitating Seinfeld episode #169, in which The New Yorker publishes a Ziggy cartoon inadvertently plagiarized by “some charlatan” (Elaine).

The connection was exposed by an eagle-eyed professor at the University of Wisconsin who thought Bliss’s cartoon looked familiar and fished out the Marvel comic from his archives. He immediately alerted the New Yorker and, after speaking with Bliss, a spokeswoman told the Post that the cartoonist “thought it was an overt reference, and not an attempt to plagiarize. He thought it was a tribute.”

The New Yorker has since amended the website to properly credit the original source. Lucky for them the snafu came to light after the contest was closed, so they didn’t have to deal with a flood of clever caption submissions reading: “The New Yorker is stealing my ideas.”

UPDATE: A reader points out that Neil Gaiman, The Sandman creator and an acquaintance of Bliss, has dipped his oar in: "It's hard not to feel that Prof. Lammers has sort of missed why it's funny -- it's because it's a Jack Kirby monster and a Harry Bliss man. That's the point."