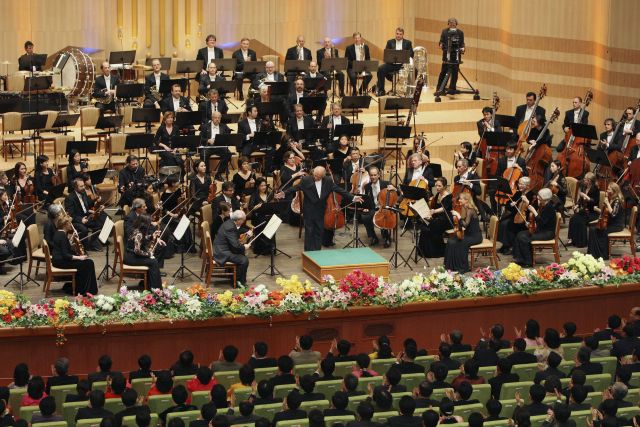 The New York Philharmonic Orchestra’s historic concert in North Korea concluded hours ago, marking the first performance by an American orchestra in the impoverished, totalitarian nation. The event also marked a first for much of the press, who are routinely denied access to North Korea and, once inside, usually find their movements tightly controlled. The Times has a stunning slideshow of photos snapped en route from the airport to the center of Pyongyang, something the photographer says is never permitted.

The 48-hour visit began Monday with an extravagant state welcome featuring “a gala performance of traditional music and dance, and an endless banquet with quail eggs, roast mutton and pheasant ball soup.” The lavish festivities might surprise most North Koreans, as electricity is scarce throughout much of the nation and ordinary citizens are not permitted to own cellphones, use the Internet or listen to radio broadcasts from other countries. 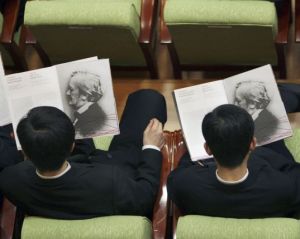 The Philharmonic concert was held in the 2,500-seat East Pyongyang Grand Theater, with former U.S. defense secretary William Perry seated in the audience next to Ri Gun, North Korea's deputy nuclear negotiator. North Korean dictator Kim Jong Il was not spotted in the audience, according to the Times. The concert began with the North Korean national anthem, followed by the Star Spangled Banner. Also on the program was Richard Wagner's prelude to Act 3 of “Lohengrin,” Antonin Dvorak's Symphony No. 9 “From the New World,” George Gershwin's “An American in Paris,” and Leonard Bernstein’s “Candide” overture. A rendition of “Arirang,” a beloved Korean folk song, reportedly brought tears to the eyes of many in attendance.

When the concert ended, the Philharmonic received a five-minute standing ovation from the audience, many wearing badges with a portrait of Kim Il Sung, father of Kim Jong Il. The decision to perform in North Korea has been predictably controversial. Critics like Terry Teachout have found fault with Maazel’s hope to bring "peoples and their cultures together on common ground" – and not just because the performance was only accessible to the party elite:

Even if such a concert were to be telecast, the handful of North Koreans lucky enough to see it, isolated as they are from the rest of the world, might well conclude that by sending a great orchestra there, the U.S. was showing its support for the tyrants who rule them. That's why I've come to the conclusion that should the Philharmonic choose to play in Pyongyang, it will be doing little more than participating in a puppet show whose purpose is to lend legitimacy to a despicable regime. [Anyone doubting Teachout’s description of the regime should read this shocking testimony.]

Condoleezza Rice was visiting Seoul on Monday for South Korea’s presidential inauguration; she told the Times she “had no plans to come to Pyongyang and sought to play down the performance as a diplomatic instrument.” The concert was broadcast live on North Korean state television and radio, and can be heard tonight at 8pm on WNYC. It will also be televised on local PBS station WNET tonight at 8pm; after midnight tonight you can stream the full concert online at VideoThirteen. WABC reporter Jim Dolan is accompanying the Philharmonic and blogging about the trip. His last post appeared Monday morning before leaving China for Pyongyang; North Korea is not not known for superior bandwidth.