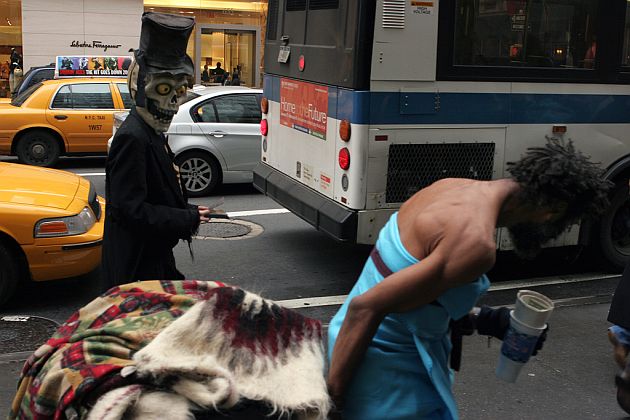 New York City faced some stiff competition in the Forbes Top 10 “Misery Measure”, but ultimately moped away with a respectable fourth place, losing only to such perennial dystopias as Detroit (#1, forever); Flint, Michigan (#3) and… Stockton, California, in the #2 slot? Apparently, the Bay Area satellite has one of the highest foreclosure rates in the country and a swelling population.

To compile the list, Forbes compared 150 of America’s largest metro areas based on data from Bert Sperling, a researcher from Portland whose city, conveniently, is not one of the ten most miserable. Here’s how New York fared compared to the other cities, with 150 being the lowest score:

Thanks, Forbes; we’d be high-fiving each other if this town wasn’t always sucking the will to live out of us. Perhaps the most disheartening part of the top ten list is that they declare Los Angeles (#7) to be somehow less miserable than us, with a Total Misery Measure of 632. Anyone who’s spent time in L.A. knows that people there are actually much more miserable; they’re just not aware of it unless the coke somehow runs out. (Which never happens.) Also: Andy Dick lives there.

The capitalist tool points out that while New York’s financial services, media, advertising and tourist industries provide job opportunities, the cost of living “can make all but the super-wealthy miserable.” You don’t say, Steve Forbes? Tell us other reasons why we're so miserable! Well, at 10.5%, income taxes are also more than twice the national average, while, inexplicably, our average commute of 36 minutes each way is the worst out of any major city.

Maybe we've lived here long enough to internalize the misery, but a 36 minute commute sounds like warp speed to us.