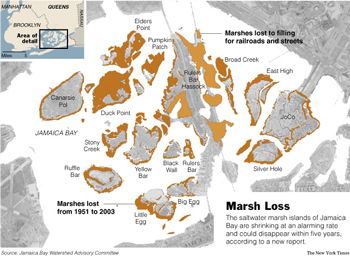 The marshlands in Jamaica Bay that make up a portion of the Gateway National Recreation area and includes the Jamaica Bay Wildlife Refuge are disappearing so quickly that some estimate all of the marshes could disappear in as few as five years. The New York Times reports that recent satellite images indicate that about 33 acres of tidal wetlands in the bay are disappearing annually, almost double the prior estimate of 18 acres per year based on a 2001 study. The cause of disappearing marshes is disputed and recommendations for their preservation involve a lot of money.

Some scientists believe that it is the large amount of nitrogen being discharged into Jamaica Bay by wastewater treatment plants that are killing delicate marsh plants. Once these plants die and their roots lose hold of the sediment that give the marshlands shape, the ecosystem is vulnerable to being just washed away by the tides and currents. Currently, wastewater treatment plants pump 35,000 pounds of nitrogen into the bay's waters daily. A member of an advisory committee at the National Resources Defense Coalition claims that cutting that figure in half could substantially slow the rate of marshland erosion. Outfitting East River wastewater treatment plants with the technology to achieve the same reduction is costing $700 million. No plans are in store to do the same for the Jamaica Bay facilities.

Angela Licata, the deputy commissioner of the Dept. of Environmental Protection (which operates the city's wastewater treatment plants), says that the link between nitrogen and the disappearance of marshlands is weak. She also points out that the level of nitrogen pumped into the bay has decreased by a third over the last decade, just as the rate of marshland erosion was increasing. The DEP will offer a final plan on marshland protection this October, but nitrogen reduction is not likely to be a component. The city may work with the Army Corps. of Engineers to undertake a wetlands restoration effort.