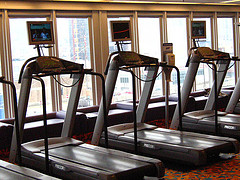 Not only are New York gyms poorly run, but the establishments that are supposed to make you healthier are doing the opposite. The Daily News reports on the germ-ridden gyms of the city in a fairly unsurprising article.

The paper spot-checked Dolphin Fitness, Equinox, Crunch, NYSC and YMCAs around New York and "uncovered potentially harmful bacteria lingering all over exercise mats, bicycles, drinking fountains and other surfaces. The equipment posing the highest risks are cardiovascular machines used by many people in quick succession and equipment, including dumbbells or mats, that are passed around." Seems not everyone is wiping down their machines!

One Bay Ridge man was put on antibiotics after his foot became infected from his gym's shower, but the paper's test uncovered much worse, including "various bacteria and MRSA, the antibiotic-resistant staph infection known as the superbug." If you work out at Crunch Fitness in Midtown, then your gym has fecal bacteria hanging around the water fountain! Like we needed another reason not to work out. Fear not, Forbes covered this last month with tips on how to avoid the plague while you get physical. Capitalizing on gym germiphobes, GymSoap offers up a solution to ease your mind while you work your body. Their press page also includes long list of articles that will further put the fear in you, including an ABC News Primetime report that "found staphylococcus, streptococcus viridans, diptheroids and e-coli - the most common bacteria in human feces" on a pair of dumbells and "candida - the germ that causes yeast infections" on one exercise bike...both in New York.

As one gym-goer points out: "we live in New York, there are germs everywhere."