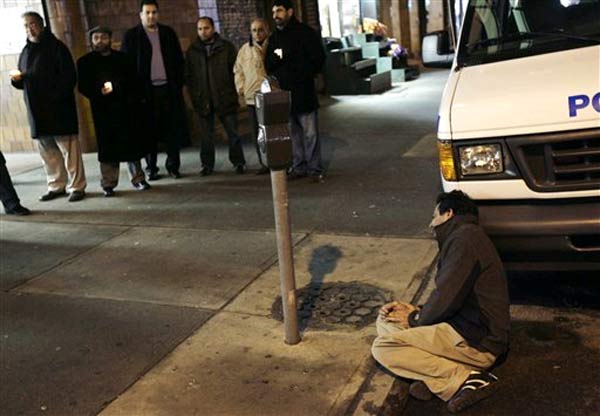 As violence continues in Pakistan in the wake of former Pakistani prime minister Benazir Bhutto's assassination, New York City's Pakistani population was shocked by the news, watching news coverage and holding vigils. One woman said to the Daily News, "For us, this is like losing [President John] Kennedy. She wanted peace. She wanted democracy. And she lost her life for these things." And a man told the NY Times, “I think there will be a lot of violence after this, and chances are pretty slim for democracy."

Bhutto had been at a rally in Rawalpindi, in hopes of winning the January election and becoming prime minister for a third term, when a suicide bomber attacked. CNN is reporting that Pakistan's Interior Ministry says "Benazir Bhutto died from a fractured skull after hitting her head on a lever -- not from a bullet or shrapnel." Additionally, the ministry says the attacker has ties to al Qaeda. The NYPD increased security at several locations, such as the Pakistani Consulate, United Nations, and Pakistani neighborhoods and businesses. But many Pakistani residents are worried about relatives in Pakistan. One said of relatives there, "I called my family this morning, and they said they are not stepping out of the house People have set fires. Cars are burning."

Mayor Bloomberg acknowledged the more than 100,000 New Yorkers of Pakistani heritage in his statement about Bhutto's death:

"Hers was a voice for democracy, and the silencing of it - by such brutal means - is a shock to us all. Ms. Bhutto's death - and the deaths of the many other Pakistanis who were killed today simply for expressing their views - is a great loss for friends of democracy and for everyone who is united in the fight against terror. It's also a grim reminder that many people consider the freedoms we cherish a threat. The perpetrators of this violent act must be brought to justice, and it is my hope that President Musharraf will follow through on free and fair elections in January as a testament to Ms. Bhutto's legacy."

The NY Times has a map showing NYC's Pakistani neighborhoods.