New York City will impose a five cent fee on plastic and paper shopping bags starting October 1, following a contentious City Council vote Thursday afternoon. The Council voted 28-20 in favor of the legislation, which also has the support of Mayor de Blasio. The bill won't be actively enforced until April 2017.

"There is going to be a large amount of time to really get the information out to the public," said Council Speaker Melissa Mark-Vivereto, who endorsed the bill last week. "We're not going to take people by surprise."

Today's legislation is a less-stringent version of a bill first introduced back in 2013, which would have charged 10 cents per plastic bag. People who use food stamps will not have to pay the extra charge, and bags used to package medication and takeout from restaurants will be exempt, as well as grocery store bags used to wrap up meat and produce.

The five cent fee, not to be confused with a government tax, will go directly back to shop owners. And while the primary goal is to cut down on the nearly 10 billion plastic bags that clog sewer drains and decorate sad trees each year, sponsors Margaret Chin and Brad Lander say the accompanying paper fee will discourage New Yorkers from simply switching over to paper bags.

Supporters of the legislation—including the NY Times editorial board, just in time for today's vote—have long pointed to the steep costs of hauling tens of thousands of tons of non-recyclable bags out of the city: roughly $12.5 million in public funds each year, according to Sanitation Commissioner Kathryn Garcia. Based on the impact of similar programs in cities like San Francisco and Washington, D.C., the fee is projected to reduce New York's annual plastic bag use by about 60%.

But support for the bill among City Council members has been far from unanimous. Critics say the fee will negatively impact poor New Yorkers, for whom seemingly-insignificant charges add up. Council Member Chin acknowledged her critics on Thursday, listing her outreach efforts with NYCHA residents and seniors, and plans to distribute reusable bags for free in low-income neighborhoods in the coming months.

Democratic and Republican council members reiterated their opposition on Thursday. Some said they'd prefer a five cent incentive for reusable bags, while others said the five cent fee should go to City initiatives for recycling, rather than business owners. 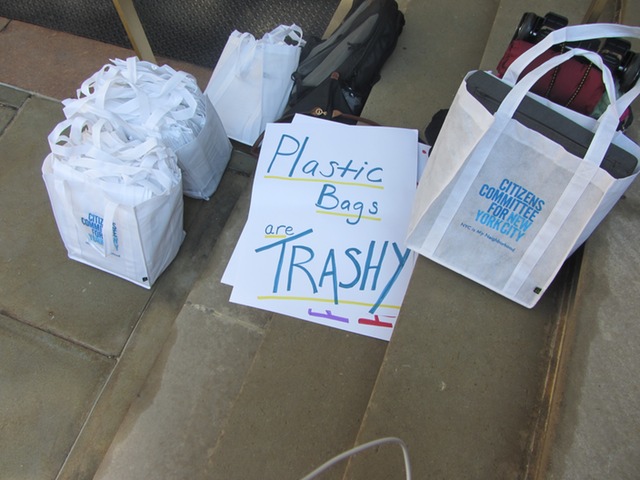 "I stand here for the seniors, and the blue collar workers who might not be on public assistance," said Council Member Vincent Gentile, who represents Bensonhurst and Bay Ridge. "This fee is regressive, and burns the communities it's trying to help." Steven Matteo, the Council's Republican Minority Leader and a long-time detractor of the bill, said his constituents in Staten Island will drive to New Jersey to buy their groceries in protest. "This solely enriches the private businesses," he said. Rafael Salamanca, who represents the South Bronx, also voted 'no,' arguing that his constituents, the "most impoverished" in the city, would not be able to absorb the fee.

"We have an affordable housing crisis, and yet here we are worried about plastic bags," scoffed Eric Ulrich, a Republican representing Breezy Point, adding, "what are we going to do with people who walk their dogs? Rubber gloves are too hands-on. I don't know what to tell the dog owners in my district."

"Your argument is full of dog poop," retorted Antonio Reynoso, who represents Bushwick, arguing that carting plastic bags and other waste out of the city results in thousands of truck trips through North Brooklyn and South East Queens, bringing noise pollution and noxious fumes.

Many of the bill's supporters added that, with the effects of climate change increasingly difficult to ignore, the bill is essential. Many urged their fellow council members to vote 'yes' for future generations; Council Member Ydanis Rodriguez dedicated his 'yes' vote to his two young daughters.

"Climate change is real, and the devastation that's happening is very real and frightening," said Council Member Laurie Cumbo, adding that she believed the debate had erroneously pitted environmental activists against low-income New Yorkers. "I have five NYCHA developments in my district, and I challenge [the narrative] that communities of color simply can't remember to bring bags when they go shopping," she said.

Earlier in the afternoon, reporters asked Chin, Lander and Mark-Viverito if they believed the five cent fee, accompanied with a handful of exemptions, would be as impactful as the earlier 10 cent fee proposal.

"No law is static," said Mark-Viverito. "We thought that an incremental approach was better than an outright ban. As we implement the law, we can readjust and [see] if there is a different approach."

#Bag Tax
#plastic bag fee
#plastic bags
#original
Do you know the scoop? Comment below or Send us a Tip