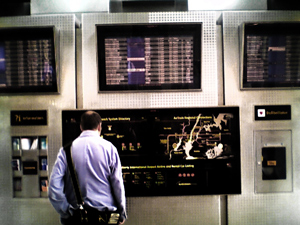 NYC is #1 when it comes to air travel misery according to an FAA report of travel stats between January and April of this year. 38% of all flights at area airports––Newark, JFK, and Laguardia––were either delayed or cancelled during the period. If one's flight was lucky enough to simply be delayed, the average delay at Newark was 95 minutes, at Laguardia one was only put off schedule by an hour. These are the averages! Given the complicated dance of making connections to get to certain destinations, this strikes us as completely insane.

The FAA blamed the sorry state of New York's air travel on a number of factors, including weather and geography. The three airports' location on the eastern seaboard supposedly makes them especially vulnerable to frequent bad weather. WABC also reported that the FAA says that the age of the airports leaves them with an antiquated runway configuration, lowering the capacity of flight traffic.

We have to give credit to Sen. Chuck Schumer for being way out in front on this issue. A November 2005 post at Gothamist is titled "NYC Area Airports Suck, Says Schumer". Just last week, Schumer was railing against the FAA and its inability to manage air traffic control. The Senator from New York wants a technological overhaul of the entire air traffic control system. A raft of frustrating travel delays were caused last week not by weather or geography, but by a computer "glitch" that stranded thousands of passengers at New York's airports.