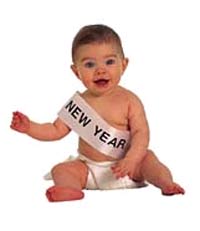 Baby Kamiyah, 8 pounds and 4 ounces, was born less than an hour after her parents came to the hospital (their doctor told the Daily News the hospital didn't rush things). Mother Kamille Lord said she was more concerned with the baby being "healthy and happy," versus any distinction as the first baby of 2008: "The TV was going and the ball was going down and literally what you heard was 'Happy New Year,' and she popped out. I was so surprised."

Baby Isabella, 8 pounds 12 ounces, gave her mother a harder time: Mother Yvonne Daza had been in labor since 4PM, "I was in too much pain. I stopped looking at like, 9 p.m. I was just happy it was over." Her husband Stuart Sears was more able to joke, "The ball dropped [in Times Square] and the baby came out. We thought she might have a little hat on." Sears' mother, City Council member Helen Sears, was also at the hospital and she was thrilled, "I watched as the ball came down and Isabella came into the world, together, simultaneously there they were. It was just wonderful."

We can't wait until Mayor Bloomberg visits the babies while wearing a fetching sweater! And the parents of Long Island's first 2008 tot thought that they were having a boy, so they bought Michael Jordan baby clothes and painted the room in boy colors. Of course, the baby decided to surprise them and was actually a girl.