Yesterday would have been Mathieu Lefevre's 31st birthday, had he not been killed by a flatbed truck driver who left him for dead on a Williamsburg street one night last October. On the eve of this sad milestone, the NYPD filed court documents revealing that the case was officially closed, back on January 4th. The main investigator handling the case for the NYPD Accident Investigation Squad, Detective Gerard Sheehan, says Lefevre was at fault for attempting to pass driver Leonardo Degianni on the right. Today, an attorney for the Lefevre family released this surveillance video, which he says proves that Lefevre was "in no way at fault."

In determining that Lefevre was at fault, Detective Sheehan judged that "the bicyclist is subjected to the vehicle traffic law when there is no marked bicycle lane and should not have been passing on the right while on the one lane roadway." Steve Vaccaro, an attorney for the Lefevre family, counters:

The suggestion that Mathieu Lefevre was in any way at fault for the fatal crash demonstrates once again the lack of understanding of the rules of the road among NYPD officers, including, remarkably, members of the Accident Investigation Squad. NYPD seems to be relying on VTL Section 1123 in claiming that Lefevre should not have attempted to pass the truck on the right. But Section 1123 expressly allows passing on the right when there is enough unobstructed room in the roadway for two lanes of traffic.

Moreover, the truck driver violated the law not only in failing to signal his turn, but in failing to make the turn as close as practicable to the right-hand curb, as he was required to do under VTL Section 1160(a). The truck driver appears to have been on top of the double yellow median on Morgan Avenue prior to making the right turn onto Meserole. For this reason, there was ample room for Lefevre to attempt to pass the truck on the right pursuant to Section 1123. Lefevre would have been prohibited from crossing the double-yellow median to pass the truck on the left, and (since the driver didn't signal or in any other way indicate he was about to turn) Lefevre is completely blameless for this crash.

Here's the video, in which you can see Lefevre passing the flatbed truck moments before he was killed. As Vaccaro points out, there is more than enough room on the right for Lefevre to legally pass Degianni. This is also a good time to note that surveillance video shows Degianni did not have his turn signal on leading up to the intersection, a catastrophic failure that could have saved Lefevre's life: 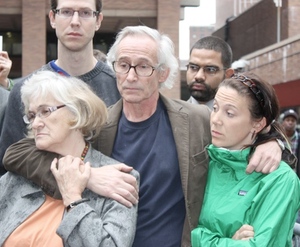 The Lefevre family at a press conference outside NYPD headquarters. (John Del Signore/Gothamist)

The Lefevre family sued the NYPD to obtain documents relating to the investigation, and earlier this week the NYPD claimed all documentation had been handed over to the family's attorney, rendering their Freedom of Information Law [FOIL] filingmoot. But Vaccaro filed a court motion yesterday to inform the judge that "despite what the NYPD says, we have not received everything."

According to Vaccaro's filing, the NYPD is still withholding photos of the crash scene. First the family was told the AIS camera was broken, so no photos were obtained, but it turned out that photos of the crash scene were just "misplaced" by Detective Sheehan for months. They were finally provided to the Lefevre family because of the FOIL request, but Vaccaro says there are sequential gaps in the photos' file numbers, which indicates there are additional photos that have been withheld or destroyed.

The NYPD is also withholding the officers' memo books that were used during the investigation. "There were 14 officers involved in the investigation that was conducted," Vaccaro tells us. "And police officers of the rank of sergeant or below are required to keep memo books. We asked for them in November, and they still have not released them." 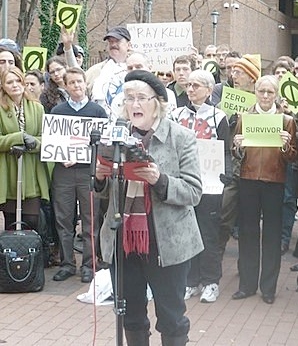 The NYPD has withheld documents on the grounds that the investigation was ongoing and releasing anything but the most basic information could jeopardize the investigation. In a sworn affidavit, Detective Sheehan said that if the videos were made public, and it turned out that they contradicted the driver's statements, this could be considered "interference" with the investigation, because it would give the driver the opportunity to change his story. (The driver, Degianni, claims he did not know he ran over Lefevre. He parked his truck a block away and went home.)

But in the days following Lefevre's death, the NYPD said through its official press office, DCPI, that no criminality was suspected, and other officers, speaking off the record, said the same thing in the days following the accident. "The NYPD announced very early on that no criminality was suspected, so this is a post-hoc rationalization," Vaccaro argues.

This is the third surveillance video the Lefevre family has released; the other two appear to contradict what went into the AIS report. (A fourth video, which shows the actual crash, will most likely not be released.) "The reason we're allowing this video to be published is because right now is when people are looking at this NYPD document that claims Mathieu Lefevre was at fault in this crash," says Vaccaro. "And I think if you look at this video and you look at this law, you cannot reach this conclusion."

#AIS
#cyclists
#mathieu lefevre
#nypd
#williamsburg
Do you know the scoop? Comment below or Send us a Tip