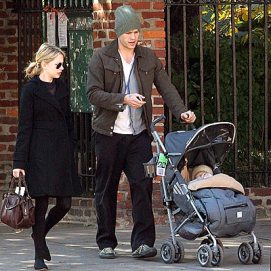 The Observer has an interesting piece on The New Victorians, who are apparently bringing monogomy and early adulthood back. To get a mental image, think: Michelle Williams and Heath Ledger in Boerum Hill, Jonathan Safran Foer and Nicole Krauss in Park Slope and Liv Tyler and Royston Langdon in the West Village. A new breed of 20-somethings in the big city, and apparently this new regime is more into nesting than late nights.

The Observer assures us this isn't a case of famous couples in certain neighborhoods, in fact "eminent New Victorian couples can be found all over New York these days, puttering about their brownstones (original detail carefully restored), or pushing babies with names like Beatrice, Charlotte, Theodore and Henry in gigantic prams to the local playground." The "lifestyle" has even invaded the long-standing hipster mecca of Williamsburg! One 26-year old from that neighborhood even went as far as saying, “It’s no longer cool to be a slacker and be living in your basement." Her friend assured readers that no one in their circle would be working at The Gap, either.

Another shocking detail: we learn on page 2 that models are no longer doing heroin, in fact they're becoming pregnant and popping out babies. If Madonna were to come here as a young, aspiring songstress today we'd have nothing to offer her. She'd have a litter of children, a good recipe for sweet potato casserole and we'd be living in a world without "Like A Virgin" (which, incidentally, is probably on many of the New Victorians iPods, albeit tastefully secure inside a lace iPod 'cozy').