Today the DOT announced the release of 26,000 decals for the city’s 13,000 yellow-taxi fleet, as part of an initiative to remind cab passengers that opening their doors can be deadly for cyclists. As you can see here, the decals urge taxi passengers to "LOOK!", using the same approach that's being rolled out at dangerous crosswalks and city bus shelters citywide. According to the DOT, seven bike riders have been killed in “dooring” crashes in the last five years. Not that there are any real consequences for those behind the doors. 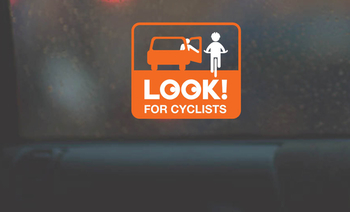 “This safety campaign takes the message to New Yorkers and visitors that you need to take a second and take a look around whenever you get out of a car,” NYC DOT Commissioner Sadik-Khan said in a statement. “The best protection that bike riders and pedestrians have is our attention, and there is one thing everyone can do—look.”

The stickers are being accompanied by a short video PSA in Taxi TVs. The jaunty little video, below, urges New Yorkers to "Take out their boss / Take out a date / But don’t take out a cyclist" and will be seen on video units in every yellow taxi cab on Taxi TV. They'll also air on the city’s "NYC life channel"... which we'll Google for you right here.

#cyclists
#dot
#janette sadik-khan
#look
#psa
#safety
#original
Do you know the scoop? Comment below or Send us a Tip