When we reported last month on the approximately $4.5 billion that city taxpayers are spending on the “dynamic neighborhood” of Hudson Yards on Manhattan's West Side, eagle-eyed readers may have noticed that our breakdown of the costs featured a tilde (~) before the $750 million figure for tax breaks for commercial developers — indicating that "this figure is our best guess."

Now, a draft paper by two New School researchers has conducted an even more comprehensive trawl for Hudson Yards public costs, and while it generally confirms our analysis, it finds a couple of items we missed: A total of $1.1 billion worth of items, in fact, bringing the public price tag to a staggering $5.6 billion, with hundreds of millions of dollars still to flow from city coffers.

"A project that was sold as being self-financed, a portion of it is — but it also comes with this rather staggering cost," says Bridget Fisher, associate director of the New School’s Schwartz Center for Economic Policy Analysis, who along with Schwartz Center research associate Flávia Leite conducted the study, which they are currently submitting to academic journals for future publication. "The packaging is that it's not going to compete with other city priorities for funding, but over time it's added up" — to $3.5 billion in initial bonding, plus now at least $2.1 billion in hidden costs.

Most of the additional tax breaks are attached to two buildings that, while not part of the development atop the railyards, are nonetheless part of the much larger special tax district. ("Hudson Yards" is widely used to mean both the smaller development and the larger area; also, both the Hudson Yards Infrastructure Corporation [HYIC], which is a public entity, and Related Hudson Yards, which is a private developer. Nomenclature is hard!)

The Spiral, a 65-story terraced office tower under construction by Tishman Speyer at 34th Street and 10th Avenue, is projected to receive $170 million in property tax breaks, according to New York City Industrial Development Agency documents; a smaller office tower west of 11th Avenue and north of the railyards, dubbed 55 Hudson Yards, will get $76.5 million in tax discounts. 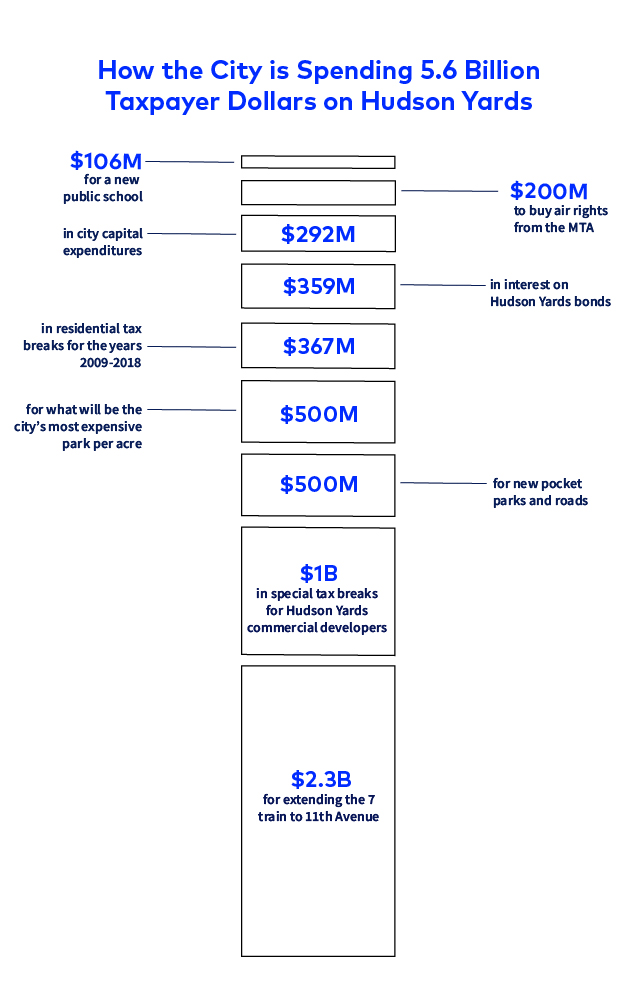 Fisher and Leite also tallied up the tax breaks that Hudson Yards residential buildings will be getting under 421-a, the controversial subsidy program for apartment buildings that now costs the city more than $1.4 billion in forgone taxes a year, and which helped bring down State Assembly Speaker Sheldon Silver when it was revealed that he had extended it to several Manhattan luxury towers being built by his campaign donors. From 2009 through this year, Hudson Yards buildings have already racked up $367 million in 421-a breaks, according to Fisher and Leite; but that doesn't account for residential units not yet constructed, or for existing buildings' future 421-a tax breaks, which can last up to 20 years.

The New School duo also identified other city spending buried in the fine print: $12 million on building demolition, $106 million for a new public school in the Hudson Yards district, and $359 million in interest on Hudson Yards bonds that the city covered while the Hudson Yards Infrastructure Corporation waited for development that was delayed by the Great Recession. (Though the HYIC has made some payments back to the city in exchange, Fisher says her research found no legislative requirement that it do so.)

Digging up all these figures wasn't easy, says Fisher, requiring "a deep dig into all these city budget documents." For the missing commercial tax break numbers, Fisher and Leite had to file a Freedom of Information Law request with the NYC Industrial Development Agency [IDA], which gives tax breaks to developers. The IDA has not otherwise made its projections publicly available.

(Interestingly, Gothamist's projection of $100 million for the tax breaks to be provided to 50 Hudson Yards — a guesstimate based solely on total floor area —turned out to be pretty damn close: The actual figure, according to the FOILed IDA documents, is $106.2 million.)

This opacity is exactly what the City Council tried to eliminate via Local Law 48 of 2005, plus its followup Local Law 62 of 2010, both of which tried to force the city's Economic Development Corporation [EDC] to quantify how much the city spends each year on developer incentives. But, explains Sean Campion of the Citizens Budget Commission, because the Hudson Yards subsidies are so convoluted — payments in lieu of taxes that are paid to a special quasipublic corporation, but at a discounted rate from what developers would normally pay — the EDC isn't required to publish those in its Annual Investments Report, so they remain an official mystery unless you're armed with FOIL requests.

And while both Hudson Yards and its subsidies are now set in concrete, it's worth keeping in mind when future pay-for-itself-with-magic-beans development plans are floated — or when Hudson Yards itself demands more money, as it just did in August when the City Council, with no fanfare, voted unanimously to tack on another $500 million in bonds to pay for more pocket parks. (Related Hudson Yards president Jay Cross told Gothamist previously that the city is "going to get more than paid back" for the billions in subsidies.)

"When Mayor de Blasio wanted to build the streetcar in Brooklyn and Queens, he's pointing to Hudson Yards as a successful use of TIF, and calling it a self-financed project," says Fisher, referring to tax increment financing, a controversial method of funding development by diverting property tax revenues. "And my work is to try to say that that's misleading." Unless you're willing to overlook a couple billion dollars, among friends.