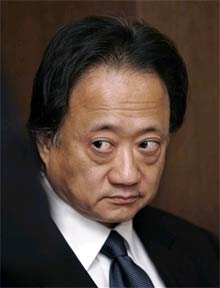 The prominent Democratic party donor and California fugitive Norman Hsu's connection to New York City's New School is examined in the NY Times today. Hsu donated hundreds of thousands of dollars to national Democrats like Senators Hillary Clinton and Barack Obama, to governors like Eliot Spitzer of NY and Ed Rendell of Pennsylvania, and NYC politicians like City Council members Christine Quinn and John Liu and City Comptroller William Thompson. Hsu, who had been wanted by California authorities since 1992 for defrauding investors in a Ponzi scheme, was going to surrender himself last Wednesday, but ended up on a train to Denver.

The New School's president, former senator Bob Kerrey, had recruited Hsu to be a board member of the school. Kerrey admitted to the NY Times, "I recruit people for the board, and anything that makes it harder to recruit them is a problem. To put them in the same paragraph as Norman Hsu is not necessarily going to make them feel good. And it’s not going to make it easier to recruit new trustees.”

Kerrey says that he's not looking for political donors per se, simply ones who are interested in the school and who will donate at least $25,000 a year. Well, it probably doesn't hurt that people with deep pockets probably enjoying being on a board of a school whose president is a popular former senator. Check out other New School trustees who have serious political fund-raising muscle:

- Leo Hindery: "leading fund-raiser for John Edwards who has given nearly $270,000 to Democratic candidates and committees since the 2004 election cycle"
- Cheryl Cohen Effron: "along with her husband, Blair, an investment banker, has donated about $330,000 to the Democratic Party" since the 2004 election cycle
- Howard Gittis: "vice chairman of McAndrews & Forbes" and "'bundler' for the Republican presidential candidate John McCain" who has "donated more than $240,000 to both Democratic and Republican candidates and committees"
- George Haywood: "private investor" and "part of Senator Barack Obama’s inner fund-raising circle" who "helped Mr. Obama manage the money he earned in 2005 from a book deal...donated $130,700 to Democrats since 2004"
- Bernard L. Schwartz: "former chief executive of Loral Corporation, a leading military contractor" who "was particularly close to the Clintons, who invited him to the White House for Mr. Schwartz’s 71st birthday in 1997. Since the 2004 election cycle, Mr. Schwartz has donated $254,600 of his own money" and "is credited with giving $1.5 million to Democrats during the Clinton White House years"

And Hsu is currently under guard while at St. Mary's Hospital in Denver. When he was found on the Amtrak train from Oakland to Denver, he was described as being ill, "freaked out," and shirtless and shoeless. Hsu's lawyer suggests that Hsu has some mental-health issues. He will be turned over to California authorities when he is released.