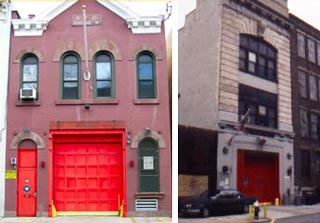 Five years after they were closed, two firehouses in Brooklyn have found new purposes: classical music and firefighter advocacy. Engine 204 house at 299 DeGraw in Cobble Hill is being taken over by the Brooklyn Philharmonic. The orchestra has pledged to invest $2.6 million converting the building into administrative offices for the group as well as creating performance space.

The second firehouse, on Wythe Ave. in Williamsburg, is being handed to the community group that protested Engine 212's closing the loudest. People's Firehouse is the group that attempted to thwart their neighborhood firehouse's closing with sit-ins and barricades. Ultimately they were unable to prevent the closing, but they now get to run the building, where they will hold anti-arson and fire safety programs, as well as use the building as a community center with another group.

Former homes of Engine Cos. 204 and 212 in Cobble Hill and Williamsburg, respectively

#brooklyn community group
#Brooklyn Philharmonic
#firehouses
Do you know the scoop? Comment below or Send us a Tip