New MTA Station Managers Are Sweating the Details, But Will It Matter?

What if rust stains, graffiti and urine-soaked subway stations weren’t the norm? New York City Transit President and British citizen Andy Byford doesn’t think they should be. So Byford’s created a new management position at the MTA for 23 brave (foolhardy?) people who are now responsible for the appearance and cleanliness of as many as 25 stations each. In their first month they’re inspecting all their stations and compiling a list of everything that’s wrong. It's like a taxonomy of decrepitness.

On a recent evening, one of those Group Station Managers (GSM), Sandy Castillo, was on his second week on the job and conducting his first inspections at the Flatbush Avenue/Brooklyn College 2/5 terminal.

With a notebook, pen, and cellphone in hand, it doesn’t take long to document what’s wrong: Mysterious brown stains on the tiles, graffiti and stickers on the subway entrance sign; a discarded bike lock attached to the ground-level subway entrance railings; clear mini-liquor bottles stashed in a hole at the top of a gate; peeling paint and rust stain on the ceiling.

And that’s just in the first five minutes.

He notes the bike lock, graffiti and stickers should be a quick fix. “These are items we can take care of right away," Castillo said.

Castillo stops to smile and introduce himself cheerfully to a group of older women in line to buy tickets. They smile and wave politely.

Some of the new GSMs comes from the private sector and have no experience in public transit. But most, like Castillo, who was previously a senior manager in the signals maintenance department, are culled from the MTA’s rank and file.

“It’s a new approach,” he said of Byford’s plan. “It’s very different than what’s in the past, in terms of putting the customer first. There’s a feeling now, that now is the chance to really make a difference. There’s a lot of energy.” 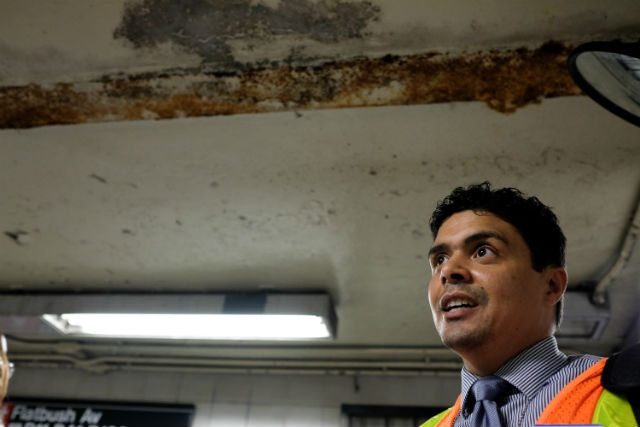 Castillo has his work cut out for him (Stephen Nessen / Gothamist)

He continues his tour, surveying the condition at every entrance—noting which staircase has water damage issues—identifying each one by a small sign attached to the stair: S2 (stairway 2). At the top of one he finds a cracked pipe with exposed electric wires connected to an advertisement.

"This I'm going to refer tonight to electrical, so this is the kind of item I'm going to immediately refer to them."

Byford believes that by focusing on these details it will improve the MTA's public image and maybe bring people back to the system. Since 2015, ridership has steadily declined by about 2 percent.

"You don't turn up at an airport and expect it to be in a pigsty state, you expect it to look good and people should expect the same of New York City Transit," he said.

Speaking to reporters at an announcement about this new management position, Byford said it’s about winning back a jaded public—and showing that the MTA is a competent organization.

"You have to prove to people that you will be capable of properly of managing the billions of dollars that we need to do what's really needed to upgrade the system."

What Byford really wants (and needs) is about $40 billion to fund his Fast Forward plan to improve the reliability of train service. The MTA currently has no way of funding it, so for now, Byford is focusing on the little things that he can do with the current resources. 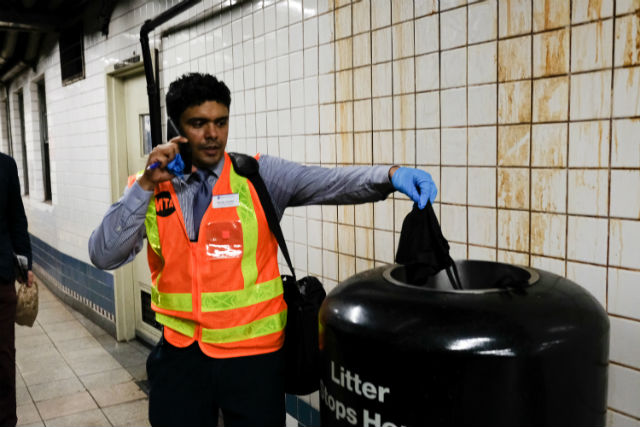 In a statement, an MTA spokesperson said that the new positions were created without “incurring additional costs” and with reductions in other areas. The agency wouldn’t specify how much each manager is paid or what was reduced to create these positions.

A New York Times investigation this year found, on average, including overtime and benefits, MTA managers make about $225,000 a year.

The GSMs will have individual budgets for overtime work, and some of the funds they need to complete projects will come out of the Subway Action Plan budget.

But some problems plaguing the system don’t have quick fix.

The peeling paint above the tracks is the result of water damage. This is a low-lying station, so water will always come into the station. To paint above the tracks Castillo will need to initiate a series of steps, including asbestos testing, paint scraping, and will need to find a time no trains are running at this station, or put in an order to halt overnight service.

At one-point Castillo poked his head into the men’s bathroom. It was full of cigarette smoke, and a pile of clothes and bags could be seen in the stall, as well as pair of bare feet poking out.

“Someone there, right?” he asked me.

Turning to his superintendent, Stephanie Jones, he tells her, “We got to pay attention to this room.”

He moves on, not engaging with the person.

Homelessness is at a record high in the city. President Byford doesn’t see it as the MTA’s job to deal with homeless people in the subway; “it’s a societal problem,” he said at a recent board meeting.

Further adding that there’s nothing wrong with people want to warm up in a subway station, “but lying across a seat or behaving in an antisocial manner or making a mess is not acceptable.”

Castillo goes on to find a pile of clothes, a bag of oranges and a banana on the landing of an entrance nearby. He notes it could be a hazard if an evacuation was needed and people were tripping over these items. I mention the items could belong to the guy in the bathroom. “Maybe,” Castillo said. He has the superintendent get a cleaner to throw the belongings out.

A week later, I returned to examine the station, and see what Castillo had accomplished.
There’s a fresh coat of paint on the wrought iron fencing around all but one of the entrances. The tiles seem to have been power washed and the weird brown stains are gone. The exposed electrical wire is back in the casing.

But there are still stickers on the subway signs. The bike chain is still attached to a fence. And those pesky liquor bottles are still stashed on top of the gates.

Several regular riders, when asked if they notice anything different in the station, shook their heads no. But when pressed whether the station seemed a little cleaner acknowledged it’s possible.

“It seems much cleaner to me,” commuter Patricia Heyward said. “That’s an improvement.”