Despite Mayor de Blasio's recent efforts, about ten thousand New Yorkers are estimated to be living in overcrowded and hazardous three-quarter houses—apartments, primarily in central Brooklyn, where landlords have been known to cram addicts, recently released prisoners, and the mentally ill in illegal conditions, capitalizing on the $215 monthly shelter allowance the state gives to people on public assistance.

The New York Times exposed Yury Baumblit, a particularly egregious three-quarter house operator, last spring, documenting his efforts to keep tenants in a dangerous cycle of drug treatment and relapse, shuttling them to specific treatment facilities, allegedly in exchange for Medicaid kickbacks. On the whole, housing attorneys and advocates say, three-quarter houses are subdivided firetraps that are rife with housing-code violations, and often packed wall to wall with bunk beds. To live in a three-quarter house, residents say, is to be under constant threat of abrupt, illegal eviction. But to eliminate the model altogether would only exacerbate the homelessness crisis.

Brooklyn Councilmember Jumaane Williams, who chairs the Housing and Buildings Committee, summarized the city's difficult task at an oversight hearing on Thursday. "We have the dual problem," he said, "of trying to make sure we find fixes [for the three-quarter house system], without taking housing away from people who desperately need it."

In response to the Times expose, Mayor de Blasio convened a multi-agency task-force to crack down on illegal three-quarter house operators. In the last year the Fire Department and departments of Buildings and Housing Preservation and Development have conducted frequent inspections at New York City apartments occupied by ten or more unrelated adults on public assistance—a reliable indicator of a three-quarter house, in the absence of any official registry.

To date, the task force has conducted 169 inspections across 95 buildings, Human Resources Administration Commissioner Steve Banks testified this week. A total of 428 adults have voluntarily moved into temporary emergency housing (single-room occupancy apartments with supportive services), and 139 have been placed in permanent housing alternatives—either supportive housing, or subsidized housing with the assistance of SEPS or LINC vouchers.

In 2014 the Investigation, Revenue and Enforcement Administration (IREA), a branch of HRA, began investigating three-quarter operators who were allegedly forcing their residents into certain treatment programs—in some cases even compelling tenants to relapse—in exchange for illegal Medicaid kickbacks. Police arrested Baumblit in April. A total of 254 of his former residents have been relocated to permanent affordable housing.

But advocates say more stringent measures are needed. A follow-up from the Times last winter, before Baumblit's arrest, showed that three-quarter residents relocated from his buildings were quickly replaced with another wave, and that reputable homeless services organizations like the Fortune Society have continued to refer people to three-quarter houses for lack of a better alternative.

A new package of five bills, written in conjunction with housing attorneys, aims to empower three-quarter house tenants as they navigate housing court and the city's affordable housing services. 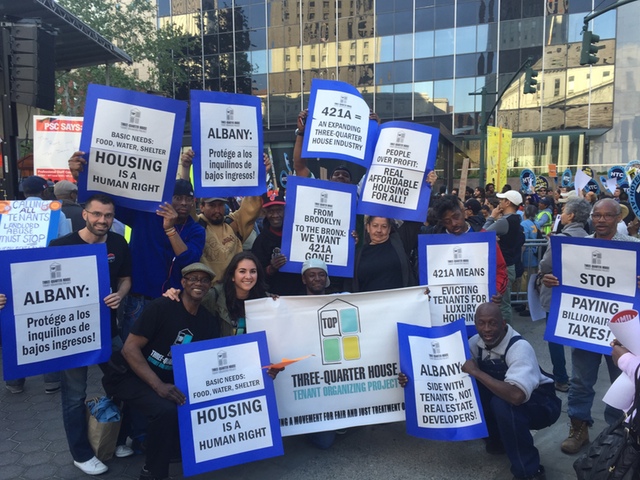 One of the bills would prohibit landlords from making their housing contingent on medical treatment, as Baumblit did. "The law is aimed at these landlords who call themselves program [operators], but really all they have is some money and some bunk beds, and they're going to take it upon themselves to dictate the sort of treatment their tenants can and can't go to," said MFY Legal Services attorney Michael Grinthal, who helped draft some of the new legislation.

"As soon as I moved to Yury's house, I was told I would have to attend treatment if I wanted to keep my bed, even though I had no drug problems," testified former Baumbilt resident and Three-Quarter House Tenant Organizing Project member Corey Bates on Thursday. "Once someone ran through their billable medicade treatment, they were discharged. Yury would bring in someone new whose Medicaid was accessible."

Advocates also hope to address a frustrating cycle: when city regulators inspect a three-quarter house, they often uncover violations that can result in a vacate order. Under ideal circumstances, this can be a blessing for residents, as the city has a legal obligation to find housing for those displaced by a city action. But many three-quarter house residents fail to meet the city requirements for assistance.

HPD also denies assistance to tenants whose buildings have been under a vacate order for more than 90 days. Deputy Commissioner Anne-Marie Hendrickson testified on Thursday that 90 days is a "reasonable period of time for tenants to apply for services," and that setting parameters allows HPD to prioritize households "most in need." But advocates counter that many three-quarter house tenants unwittingly move into buildings that are under vacate orders, and have been for more than three months.

"The landlords often just tear down the vacate notice and re-rent the place," Grinthal said. "So people move into these places and have no idea there's a vacate order until there's an incident—a fire, or the electricity goes out."

Proposed bills would expand the number of acceptable documents for proof of address, and prohibit any time limit on applying for relocation services. 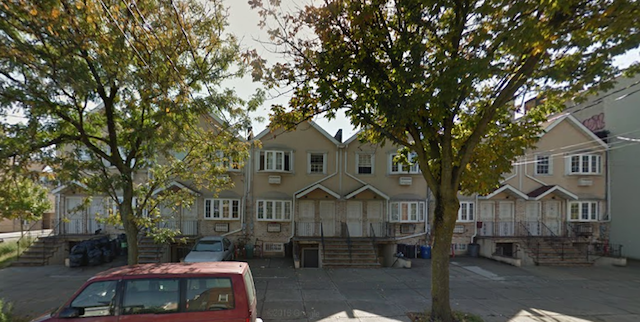 Six houses on New Lots Avenue that were the focus of the NY Time's investigation into Baumbilt's three-quarter slum conditions (Google Maps).

According to Grinthal, the three-quarter housing model is inevitable so long as New York City lacks adequate affordable housing options for homeless single adults and people coming out of prison. "They are a black market within the housing market, and they are going to exist as long as there is a hole in the safety net," he said.

Many crucial reforms, he added, aren't the city's jurisdiction. Mayor de Blasio recently announced a commitment to building 15,000 supportive housing units over the next 15 years, but this year's legislative session ended without a required contract between Governor Cuomo and the state Assembly speaker and Senate majority leader for an additional 6,000.

And then there's the $215 a month the state allocates for rental assistance, an amount that has not been increased since 1988. A new resolution sponsored by Council Speaker Melissa Mark-Viverito urges the state to increase that assistance, but in the end the city has no say in what the state does.

"Ultimately, what's going to make the three-quarter industry go away, is when people have better housing options," Grinthal said. "More than anything, this type of housing is built around what $215 a month will get you in New York City: half of a bunk in a firetrap."