New Jersey Governor Phil Murphy made legalizing marijuana a key issue in his campaign last year, arguing that it would end mass incarceration. "[Murphy] will: Legalize marijuana so police can focus resources on violent crimes and enable police to focus resources on violent crimes,” his campaign website declared. He also estimated that taxes on it would generate $300 million in revenue.

In March, Murphy said he was committed to getting it passed this year. And if legal pot stores opened in the Garden State, they would be within easy reach of New Yorkers.

If New Jersey legalized pot, it would be impossible to stop people from bringing buds back to New York, unless the state restricted sales to residents only or police searched every single person coming through the Port Authority Bus Terminal, Penn Station, the PATH trains, and the six bridges and tunnels that connect it to Manhattan and Staten Island.

There is ample history of people crossing state lines to get legal intoxicants. The city of Port Chester, on the Westchester County side of the Connecticut border, blossomed with bars in the 1960s, when New York's drinking age was 18 and Connecticut's 21. Sunday beer runs to the New Hampshire border were common in Massachusetts before the state began letting stores sell it on Sundays, between 1990 and 2003.

“People want to buy from licensed dealers, and they’re willing to cross state borders to do that,” says Donna Kang Thomas, a Ph.D candidate at Columbia University who has researched the economics of the cannabis industry in Washington.

A University of Oregon study in 2017 found that after Oregon began legal sales of recreational marijuana in 2015, sales at pot stores in Washington counties along the border fell by 41%—and by almost 60% in the county across the river from Portland. Meanwhile, sales in the counties bordering Idaho were more than twice their share of Washington’s population.

New York also borders Massachusetts, which is scheduled to begin retail sales in July, and Vermont, which legalized possessing and growing small amounts in January, notes state Sen. Liz Krueger (D-Manhattan), who has sponsored bills for the last four years to legalize cannabis and regulate it like alcohol.

“We’re losing all this income,” she says, although she adds that the more important reasons to end prohibition are “economic and social justice, protecting young people, and rational thinking” about marijuana.

Senator Savino says that after Murphy was elected last November, she told New York Governor Andrew Cuomo, “Whether we like it or not, this is going to change the New York scenario.” She added, “I think you need to start thinking about what a legal market would look like.”

New York would have to develop a legal market from scratch, says Savino. It will save the state money “when you factor in how much we’ve been spending” on enforcing the current laws, she continues, but if taxes are set too high, the black market will survive because its pot will be cheaper. She also worries that a legal recreational market “could destabilize New York’s medical-marijuana program.”

Cuomo, long a foe of legalization, called for a commission to study the idea in January, but state Senate Republicans objected to funding it. He may now have the state Department of Health do the report. While as recently as February he called cannabis a “gateway drug” leading to addiction, on April 12th he told reporters that “the facts have changed,” and that it would be impossible to interdict reefer “when it is legal 10 miles from both sides of your border.”

Activist actor Cynthia Nixon, the governor’s Democratic primary challenger, has unequivocally advocated legalizing pot. “If there was more political courage coming out of Albany, we would have done this already,” she said in a video on April 11th—arguing that 80% of New Yorkers arrested for possession are black or Latino (a slight underestimate), and that “for white people, the use of marijuana has effectively been legal for a long time” (a rhetorical exaggeration).

Senator Krueger’s bill may come to the floor in the Assembly this year, but she says that's “not going to happen” in the Republican-controlled Senate. If Democrats win a majority in the upper house this November, and the Independent Democratic Conference members don’t bolt back into their alliance with the GOP, the odds would be much better in 2019.

“I think every time another state legalizes it, it moves New York State closer and closer to doing the same thing,” Krueger says. 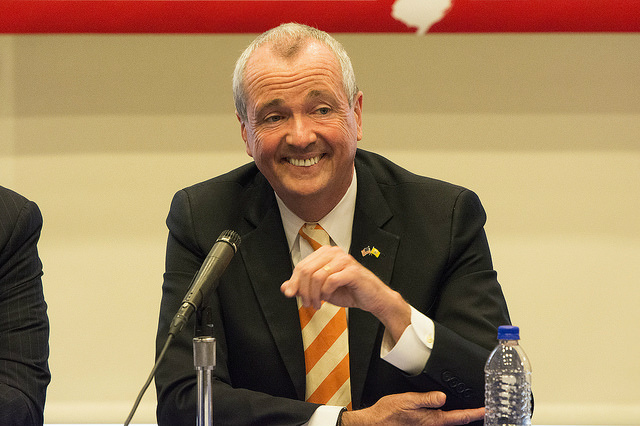 Despite Governor Murphy’s pledge, Roseanne Scotti, head of the New Jersey chapter of the Drug Policy Alliance, doesn’t expect legalization to pass in 2018. Both legislators and the public “need to understand why it’s good for New Jersey,” she says. “We’re just not there yet.”

The two main legalization bills pending in the state legislature are one introduced in January by state Sen. Nicholas P. Scutari (D-Linden) and another in March by Assemblymember Reed Gusciora (D-Trenton). Both would set up a state-regulated system of cultivation, processing, and retailing. The Gusciora bill would have somewhat lower taxes, give preference for licensing to unionized cannabis businesses, and allow individuals to grow up to six plants.

Neither bill has gotten very far. Scutari’s bill has no cosponsors, and Gusciora’s has one. Neither one has had a committee hearing this year, although Scotti says that may change after the legislature passes a budget, which is due in June.

Lyndhurst lawyer Daniel McKillop, who represents cannabis businesses and is lobbying for legalization, believes a bill could pass this year, but not until the fall. Governor Murphy is committed to doing it, he says, but there aren’t enough votes—“not right now.”

One legislator definitely not comfortable with legalization is State Senator Ronald Rice (D-Newark), chair of the Legislative Black Caucus. While he agrees with the social-justice complaint against marijuana prohibition, that arrests for possession fall much more heavily on black people and Latinos—in 2013, according to the American Civil Liberties Union-New Jersey, black people, 14% of the state’s population, were 36% of those busted for it—he believes decriminalization, not legalization, is the way forward. A bill he introduced in February would reduce the penalty for possession of less than 10 grams from six months in jail to a $100 fine.

“I still want to deter people from doing something that’s bad for them,” Rice says, before reeling off a bevy of problems he claims legal marijuana would cause. Babies born with THC in their brains. Businesses unable to find workers who can pass a drug test. People cashing in food stamps to buy herb. Drug cartels getting licenses to produce it legally. Creating more addicts as pot-smokers move on to harder drugs. And it would have the worst impact in inner cities, he says.

“If you get too high you die from it,” he adds. “It kills you directly if it’s too potent.”

There is no known case of anyone ever dying from an overdose of marijuana. Unlike opioids and alcohol, it does not stop breathing or heartbeat, as there are few cannabinoid receptors in the lower brainstem areas that control cardiovascular and respiratory functions. The “gateway theory” argument that pot inexorably leads to harder drugs is based on a statistical fallacy: While virtually all opioid, cocaine, and methamphetamine addicts used marijuana (and alcohol) first, the vast majority of pot-smokers (and drinkers) don’t go on to those drugs.

There’s “still a lot of education” to do, says Scotti, noting that it took four years for the state to approve medical marijuana.

Still, she believes legalization in New Jersey “is not a question of if, but when.” 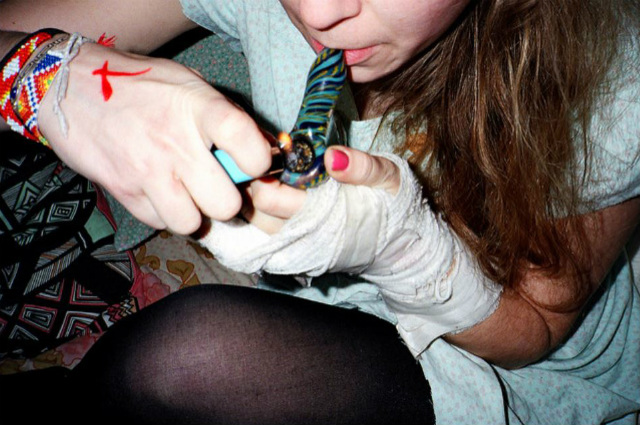 “We’re probably going to get a bill signed by June 30th,” he told a crowd of around 200 people in Jersey City last week, at a “Green Rush” meetup for aspiring entrepreneurs exploring whether cannabis will be “Jersey City’s next emerging industry.”

However, Rudder told Gothamist afterward that the legalization movement is still in the education phase, and “people have to get comfortable with it.”

The meetup reflected the stoners-to-startups change in the cannabis culture since Colorado and Washington legalized adult use in 2012. Lawyers talked about zoning law and intangible assets, not what your rights are to refuse a search by police. People asked, “Are you a consumer?” rather than “Do you get high?”

“In Jersey City, do you think there is great potential for craft-weed shops?” one man asked at a panel.

Federal law remains a problem: The marijuana cultivation and sales licensed by California, Colorado, and other states—including for medical use—remain felonies under the Controlled Substances Act of 1970. Only an Obama-era Justice Department policy that Attorney General Jeff Sessions has repeatedly threatened to rescind has prevented the Drug Enforcement Administration from raiding farmers and retailers in those states. Federal laws also define routine banking transactions by cannabis businesses as money-laundering, and retailers can’t deduct the cost of an illegal product from their taxes as a business expense.

And one criterion the Department of Justice uses to consider prosecuting a cannabis enterprise legal under state law is if its pot is being diverted to other states.

Another issue is who can get into the legal market. While politically connected figures who once pushed prohibition move into the industry, such as former House Speaker John Boehner (now a board member at a cannabis-investment firm) and former Senator Alfonse D’Amato (a legalization lobbyist), the complex licensing requirements and high startup costs in many jurisdictions that allow pot sales make it virtually impossible for the guy selling $20 sacks to go legit and open a ganja bodega—highly ironic, considering the social-justice arguments made for legalization.

“People working in the illegal market need a pathway to work in the legal market,” Kelli Arthur Hykes of the Weedmaps where-to-find-it Website said at Green Rush.

A fair legalization system in New Jersey would provide “real ways for everyday New Jerseyans to have access to the jobs and the business-ownership opportunities,” says ACLU-NJ policy counsel Dianna Houenou.

Some ways to accomplish that, she says, would be expunging criminal records for marijuana offenses, reinvesting pot-tax revenues in the communities most affected by the war on drugs, and lowering licensing fees. New York State Senator Liz Krueger has similar ideas to try to enable “small, new entrepreneurs” to participate.

New York’s medical-marijuana program, which initially licensed five companies to run four dispensaries each, required them to pay $210,000 in fees up front.

If it costs $20 million to set up a vertical cultivation/processing/dispensary business, says Scott Rudder, the system could break that down to allow smaller enterprises that cost less than $1 million.

Explicitly setting aside a share of licenses for businesses owned by racial minorities, women, or veterans, however, is illegal, says Daniel McKillop. Therefore, the legislation pending in New Jersey sets “goals” rather than mandates.