After nearly six months of construction, the Bay Ridge Avenue R subway station reopened on Friday with countdown clocks, colorful tiles, and shiny new leaning benches. But a small crowd of people gathered for the MTA's ribbon cutting to protest what was missing: an elevator to accommodate disabled New Yorkers.

"This is, once again, a slap in the face to the disability community," said Dustin Jones, 29, a board member for Center for the Independence of the Disabled, New York and a wheelchair user.

According to a class action lawsuit filed by the nonprofit legal center Disability Rights Advocates, 80 percent of the city's subway stations are inaccessible to anyone using a walker, wheelchair, scooter or otherwise lacking the ability to get down stairs.

Jones expressed frustration over the money the MTA had invested in supposedly modern upgrades for the R train stop while disregarding the needs of people with disabilities.

"This clearly shows what the MTA believes the modern age really is: no accessibility. They don’t count us in their vision. They don’t count us in their plan. It’s just the rich and the healthy.” Jones said he faced a long commute back to work after the protest. "My office is on Union Square. The R train goes there. I can’t even get in to go take the damn train," he said. "I have to go wait for a bus that comes every hour, just to get me back to work. Shame on the MTA.” 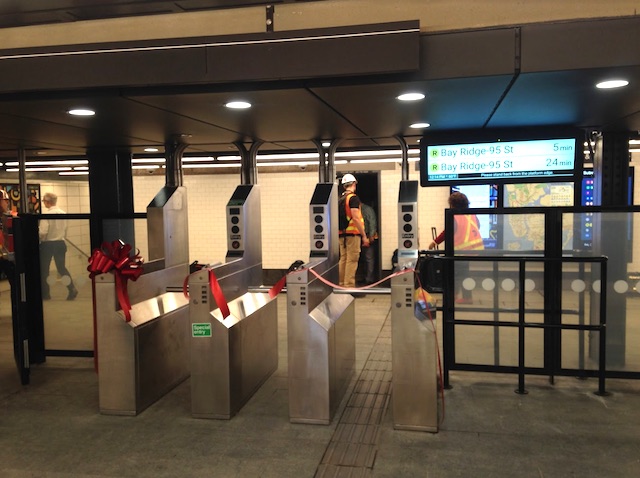 The inside of the new R stop (Gothamist)

Andrew Gounardes, 32, a Bay Ridge resident, said he and others advocated for increased bus service when the Bay Ridge Ave station closed.

“They spent $24 million dollars on a cosmetic renovation for the station. It’s nice, but USB chargers and leaning benches don’t do anything if you’re in a wheelchair and you can’t get into the station in the first place.

Gounardes called the MTA's inaction "inexcusable, and inexplicable, and flat out just outrageous."

A press release from the agency notes that the 77th Street and Bay Ridge-95th Stations will undergo renovations to make them ADA-accessible.

MTA spokesman Kevin Ortiz said that an elevator could not be installed in the Bay Ridge Avenue R station because of its layout. It's unclear when the renovations to the other two stations will begin, as the contract for the work hasn't yet been awarded.

MTA Chairman Joe Lhota also attended Friday's opening and spoke to the press on the platform—out of sight and earshot of the protesters, many of whom couldn't get down the stairs—just before the station opened to the public.

New York State Assemblymember Pamela Harris, whose district includes Bay Ridge, said she was happy to see the station revitalized, "but let's not forget that we still have areas that need a lot of work. We still need areas that [are] handicapped accessible. It's really, really important."

Ross Barkan, a New York State Senate District 22 candidate (and a political journalist), also attended in solidarity with the protestors. “The MTA spends money on so much stupid crap," he said. "Why not spend it on something that matters and that can actually help people?"

#ADA
#bay ridge
#MTA
#subway
#we the commuters
Do you know the scoop? Comment below or Send us a Tip