A recent Harlem transplant is trying to silence the ice cream man who parks on her block and plays his truck's jingle in the evenings, and some of her neighbors could not be rolling their eyes harder about it.

Mackenzie, who asked that we withhold her last name for fear that she be pigeonholed as an entitled white lady whining about her new neighborhood, bought an apartment near Central Park in the spring. "This is generally a really quiet, serene block," she wrote in an email to Gothamist. However, "The arrival of an ice cream truck in May has totally [ruined] this quiet."

The Mister Softee truck's proprietor likes to stop in one of three spots from around 7:45 to 9 p.m., according to Mackenzie, and when out of sight of cops, he plays his music so loud that she can hear it in her apartment from a block away. This is despite a provision in New York City's elaborate noise code that makes playing the truck's jingle while parked illegal, punishable by fines of $350-$3,000.

To make matters worse, according to Mackenzie, "No one seems to be willing to do anything." The first time this happened, she recalls, "I went down and said to him, 'Would you mind turning off the music?' He looked at me and he was like, 'What are you talking about?'"

She continued, "I said, 'It’s illegal for you to have your music on anyway, so could you please turn it off?"

His response: "Fuck off."

At this, Mackenzie retreated. The next time it happened, "I went down, and he just rolled his eyes."

Since then, Mackenzie has branched out, calling 311 and her local precinct repeatedly, and emailing the Mayor's Office, ice cream truck owners, and the office of Rep. Adriano Espaillat. The responses, where there have been responses, have left something to be desired. "3 different officers at local precinct have told me they do not have time for this," Mackenzie wrote to Gothamist. And one 311 request came back with this message:

Your Service Request was closed.

The Police Department responded to the complaint and determined that police action was not necessary.

She has also taken to shooting videos, like this one from inside her apartment shortly after 9 p.m. earlier this month:

The offending ice cream truck driver was not at his normal spots when Gothamist visited the neighborhood on Tuesday evening, but local residents we spoke to had equally strong feelings about the fact that someone was complaining about this.

"They moved to Harlem, and that's what the fuck happens in Harlem," said Carolyn Graham, 55, who was out catching the breeze on a St. Nicholas Avenue corner, and had not yet been told that the complainer in question was new to the neighborhood. "They need to go somewhere else if they don't like it."

Graham broke off momentarily to allow the roar of a crew of men on dirt bikes to pass, then continued, saying of the ice cream jingle, "It don't bother me none. I just go in my bedroom and turn up the TV." Down the block, a group of people were gathered in lawn chairs around a speaker with wheels, listening to R&B. "That's what people do," Graham said. "They listen to music, we have ambulance sirens, dirt bikes passing through. It's the heartbeat of Harlem. We hate it, but that's how it is."

As for the ice cream man, she said, "My kids bought ice cream from that truck...I'm not going to mess with this man's livelihood."

Shaking her head, she ascribed the complaint to people who "wanna come here and change the way people live."

"Now they're trying to call it SoHo, NoHo, NoHa—"

"Fuck SoHa!" Graham yelled. Turning to a group of neighbors gathered on a nearby stoop, she called over, "You're not going to believe the dumb shit people are complaining about!"

Around then, another longtime Harlem resident named Lillian Harris passed by. Filled in on the discussion, she said of Mackenzie, "If she can find a place where it's quiet, have her tell me. I'll go with her!" 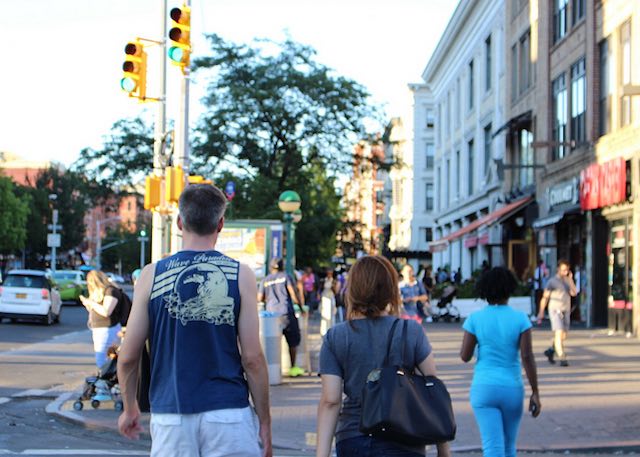 Anticipating this type of response in an earlier phone conversation, Mackenzie noted that she is from New York City, having grown up on the Upper West Side and lived all over the city. Far from being a racism-ignorant newcomer—she is white, whereas Graham, Harris, and many of her other new neighbors are black—she said the lax noise enforcement in her new home is because of the authorities' indifference to its large minority population. In her estimation, "this would never, ever be tolerated" in her old neighborhoods.

Undeterred by the backlash faced in the past by, for example, the white yoga instructor skewered after she moved to Inwood and wrote a whole Daily News op-ed about the noise (it didn't help that she referred to a kid with a speaker as a "possible criminal") Mackenzie was unapologetic about her stance on the Mister Softee guy.

"What he’s doing is against the law," she said. "I’m not lobbying to change the law. I just want him to stop doing that. I can’t imagine in a million years that anyone likes this music."

She isn't wrong in the sense that ice cream trucks, and noise more generally, are the bane of a lot of New Yorkers' existence. Noise complaints have more than doubled citywide since 2011, to 420,000. Ice cream trucks haven't cracked the top 10 most common types of complaints—in 2015, they were #13—but they're a persistent annoyance, and a growing one. From 2011 to 2016, the number of ice cream truck noise complaints citywide grew from 1,326 to 1,777.

Harlem also ranked #13, among neighborhoods ranked by noise complaints in a 2015 analysis. In Mackenzie's southern Harlem zip code, there have been 93 ice cream truck noise complaints since 2010 (a zip code in Norwood leads the city, with 693 in the same period, including 207 from the same address). As Mackenzie has found, not much happens with such calls. 9,190 of 12,278 ice cream complaints since 2010 have closed with the message, “The Department of Environmental Protection did not observe a violation of the New York City Air/ Noise Code at the time of inspection and could not issue a notice of violation.”

Often, inspectors respond days or even a week later. A DEP spokesman said that inspectors try to visit the scene of a complaint around the same time as the call, to maximize the possibility of catching the mobile jingle menace in the act, even if it's on a different day. A man who answered the phone at Mister Softee's South Bronx office said the press person there is on vacation.

My roommate Donald, who grew up in and around Harlem and still spends a lot of time there, said the floodlights that police place outside public housing buildings are the subject of gripes by people he knows. Ice cream trucks, however, he continued, writing via text-message, "lol that's funny really I wouldn't think that would be something people complain about."

Graham, the indignant Harlemite we spoke to, had another idea for where the city could allocate resources. "I'd rather they deal with all the rats," she said.

Disclosure: The author's wife lived in Park Slope in the late '90s and an ice cream man often parked outside her building playing his jingle into the early morning, as late as 2. She never called the city. Later, a cop in the neighborhood told her that the man had been arrested for selling drugs.