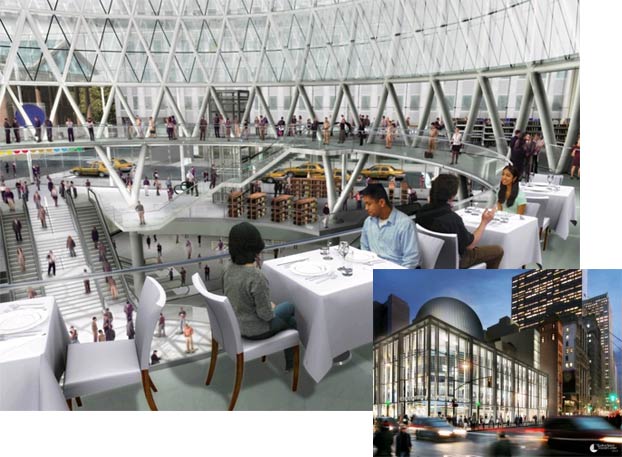 We don't know whether to laugh or cry. Last year, the MTA said that Fulton Street Transit Center would be completed by the end of 2008, leading Gothamist to write "that really means the end of 2009." Now the MTA goes beyond our forecasting and says that the project probably won't be done until 2010. Sucks to continue to be you, downtown commuters.

The project, which caused a lot excitement for its linking of disparate subway lines (the 2, 3, 4, 5, A, C, E, J, M, Z, R and W) and its soaring glass dome (also known as an oculus), is already over budget and has attracted exactly one bidder - who was rejected for offering its own wildly over budget bid. NY1 reported that construction companies joined forces to offer one rather expensive bid.

Given the way things are going, the glass dome may be downsized again. Proposed to soar 50 feet above the building and then revised to 30 feet and now 20 feet, executive director of the MTA's Permanent Citizens Advisory Committee William Henderson told the Daily News, "The way it's going, it's going to end up being a flashlight hanging from the ceiling."