The MTA is in the process of commissioning 750 open-gangway subway trains, which instead of having separated cars will consist of one long, uninterrupted centipede of a vehicle, allowing commuters free passage from front to back. When Toronto introduced this articulated design in 2011, it freed up 8 to 10 percent more space for passengers per train, and New York's trains are supposed to include wider doors to reduce boarding time, plus chargers and wifi to feed our screen addictions. One obvious downside: no longer will the (not quite) empty subway car during rush hour serve as a warning sign to steer clear and rush to the next car. Under the new regime, every subway car will be the poop (or pee, or vomit, or months of accreted body odor) car, because there will be only one subway car.

"God bless the New Yorkers, that theory [of avoiding the empty car] is not going to last," said Tracy Pepe. Pepe lives outside of Toronto and works designing perfumes and consulting on smell considerations with architects and planners. "We have that problem [of smells permeating open cars] in Toronto. I don’t think they’ve figured out that design flaw."

Among other projects, Pepe designed a champagne-and-caviar-evoking signature scent for the lobby of the Trump International Hotel and Tower Toronto (the developer of which licensed the Donald Trump name but is now fighting to get rid of it and Trump's management team), consulted with a composting facility on how to keep its odor from overwhelming nearby high-end homes, and was called in after a newly built aquarium turned out to be a stink incubator.

Pepe visits New York often, and frankly, she said, "Your subways are quite dirty from an odor perspective." A Straphangers Campaign survey in 2013 found that 2 percent of subway stations had overflowing garbage cans, 4 percent had garbage bags on the platforms, and 13 percent of underground station had rats. Another 2013 study by the group, of subway cars, found that just 42 percent qualified as clean. At the time, the MTA employed 1,030 car cleaners and 141 managers, a number that had remained relatively static compared to preceding years, when the cars were cleaner.

Stinky subway encounters are more than a minor annoyance, according to Pepe. They're taken as a given, but they shouldn't be, because they activate the fight-or-flight response deep down in all people, she said. 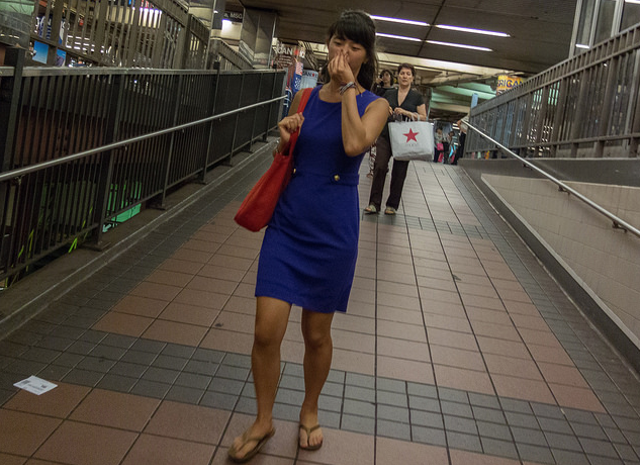 A commuter tries to gird herself against the stench of the Herald Square station in the summer of 2014. (rockerlan/Flickr)

When you walk into a subway and smell urine, it causes a primal fear. You smell vomit, and the humidity in July and August propels all those aromas...[Smell is] something that’s often not looked at in the design, but it's the number one thing that will cause a reaction in a person, not sight or sound. It’s primal. It’s in the limbic system.

Men doused in Axe body spray, hungry train riders eating pungent takeout, and people forced by life's hardships to forgo showers and sleep on the train are all factors that can make for a smelly subway ride, Pepe said. According to her, though, the problem starts with the stations. "When was the last time [the stations] were actually cleaned?" she asked.

"The focus in Toronto is the cleanliness in the stations," she said. "That’s where you’re entering, that's where you're waiting, that’s where your first impression happens." And when subway riders walk onto a train, "those [station] odors would go into that tube."

Pepe acknowledged that she is not familiar with the specifics of Toronto and New York's subway cleaning regimens, and that New York's transit system's vastly greater size, heavier usage, and more than century of age make it harder to maintain. Still, she said, nose-hair-curling smells can be rooted out without additional resources.

"Overall, the cleanliness of the stations is implementation, it’s not budgetary," she said, adding, "These types of conversations are not typically had with the cities. When you sit down, the city says, 'It’s budgetary.' Well, it’s not budgetary—you’re not thinking about it."

Indeed, the source of a stench that has pervaded the Herald Square subway station for at least seven years wasn't identified (at least in part) until this spring, when the MTA announced that it is a nearby sewage leak. The leak is a building owner's responsibility to clean up. The station is the city's third busiest. We're told the smell is still there.

To address the broader problem of unwanted underground fragrances, Pepe said, current cleaning schedules and chemicals should be examined, and deodorizing cleaners could be considered, along with natural fragrances. For new cars, open-gangway or otherwise, she said that air-flow should be taken into account in drawing up the design, and filters should be considered for the air conditioning and heating system, to take odors out of the air as it is recirculated.

As for the new subway-car design specifically, she said it would cost a lot less to factor in smell control up front than to try to resolve problems after the trains have been built.

"I hope they solve it, because it's much more expensive to solve after everything's been done, the material's been bought, and the money's been spent," she said. "And then New Yorkers have to live with it. I think [the MTA has] an obligation to the taxpayers to take this into consideration."

We have reached out to the MTA for comment and will update if we hear back.