Rising sea levels are unfortunately nothing new, but it's sometimes all too easy to think of these repercussions of climate change as far in the future—despite the fact that islands in the Pacific are growing smaller every day as the tides creep higher and higher. Now, according to a thoroughly alarming new study, the future of our coastlines are more immediately dire than previously feared: the massive West Antarctic ice sheet is at risk of disintegrating in the next few decades, meaning that people born today could very well witness devastating effects along the world's coastlines.

Extend that model by a couple more centuries, and New York City will be plunged completely underwater, along with cities like Miami, New Orleans, London, Hong Kong and Sydney, the New York Times reports. The Midwest isn't looking so bad now, is it?

"Sea level rise is not going to be felt evenly over the surface of the Earth," Rob DeConto, one of the study's co-authors, told the Washington Post. "It's really bad for New York, Boston. We are sort of in the bullseye."

If the sheet breaks up completely as a result of global warming, it could raise the global sea level by at least 12 feet. Until now, scientists thought it could take hundreds to thousands of years for that to happen—but according to this study, if we keep emitting greenhouse gases at anything close to our current rate, it could happen much, much sooner, and well within most of our lifetimes.

By 2100, sea levels could rise as much as three feet as a result of the ice sheet's breakup, according to this study. Coupled with ice melting occurring in other areas, it could be closer to six feet. Here's the effect that would have on some of the city's coastal areas, according to one model: 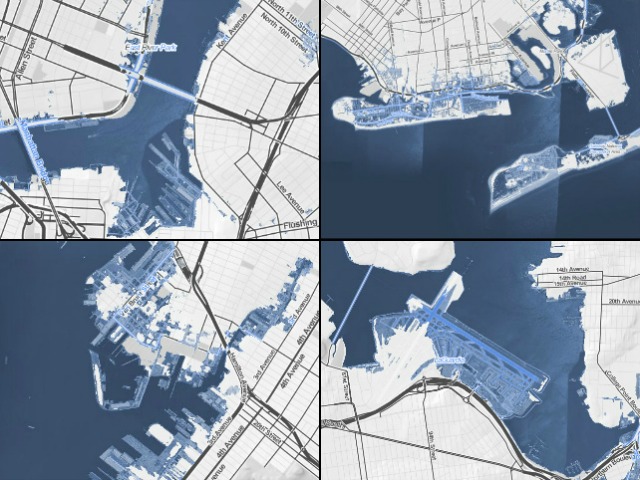 And that's just with an addition of six feet: after 2100, things could get much worse, much more quickly: sea levels could rise by a foot each decade by 2150.

"We are not saying this is definitely going to happen," David Pollard, the other co-author, told the Times. "But I think we are pointing out that there's a danger, and it should receive a lot more attention."

Not all hope is necessarily lost: if the world's leading carbon-emitting nations significantly curb their greenhouse gas emissions, the West Antarctic ice sheet—which is the size of Mexico—could avoid collapse, this study found. Unfortunately, the Paris Climate Deal, which will be officially signed by world leaders next month in New York, doesn't go far enough: we would have to more drastically reduce our emissions, and soon, to prevent the sheet from collapsing, according to these researchers.

So things aren't looking great—and this is on top of the fact that 2015 was the hottest recorded year on earth. Maybe this latest will get Mayor de Blasio to rethink his $2.5 billion waterfront streetcar, considering that at this rate, many of the neighborhoods on its route could be submerged within decades of its completion.

#climate change
#global warming
#sea levels
#we are all screwed
Do you know the scoop? Comment below or Send us a Tip