We can keep debating global climate change (it's real!) until the last polar bear takes its final gasping breath. But let's never forget that this seaside city is in imminent danger—a new study confirms New York's temperatures are skyrocketing, sea levels are rising, and we're in for one hell of a grim ride.

The Mayor's Office has just released this year's incredibly bleak New York City Panel on Climate Change report today, noting that their findings "underscore the urgency of not only mitigating our contributions to climate change, but adapting our city to its risks." Not that this should be surprising at this point. Here are some fun things to look forward to, according to the report:

This temperature spike will result in more heat waves, which sound pleasant on a day like today, but will be far less so while you're underground waiting for a futuristic F train in July 2088. (Kidding, F trains won't change between now and 2088.) The report predicts that heat wave frequency will triple by the 2080s, from two per year to six per year. Then again, extreme cold events will likely decrease, so...pick your poison.

And woo boy is it going to get rainy: mean annual precipitation will likely increase by 4 to 11 percent by the 2050s. By the 2080s, that number will have increased by 5 to 13 percent, and we'll be able to expect 1.5 times more extreme precipitation days per year.

In fact, by 2100, sea level will have risen so much it'll have doubled the area for 2013's designated coastal flooding zones for both the 100-year flood and the 500-year flood, leaving a lot of previously untouched inland vulnerable: 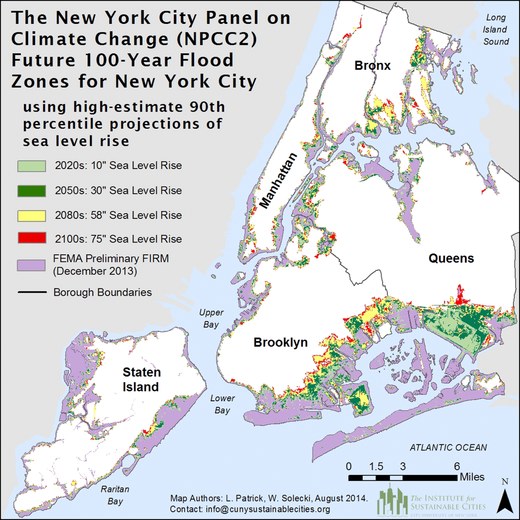 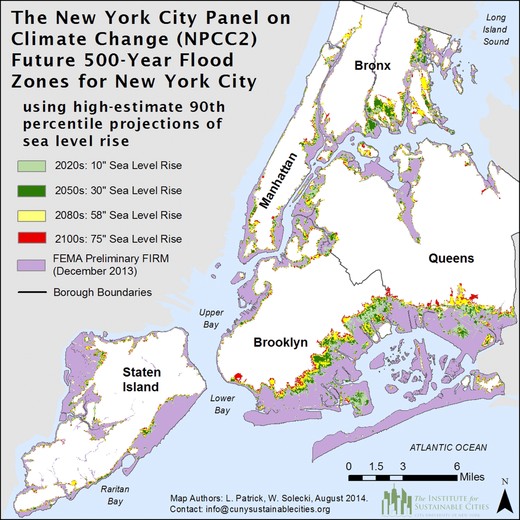 Don't swallow that entire bottle of pills just yet—there's more! All this climate confusion will likely increase respiratory and cardiovascular diseases, increase allergens, asthma and air pollution, and perhaps even amplify diseases spread by ticks, mosquitos, food, and water. We can expect more heat-related deaths, particularly among seniors, children, the poor, and disadvantaged minorities, to name a few.

There is some good news, though it still doesn't sound good enough. The city's implemented a number of new projects recommended by the NPCC report that aim to, at the very least, mitigate the effects of destructive climate change. These include funding a $335 million flood protection system for the Lower East Side, using the NYC Cool Roofs program to coat building roofs with cooling reflective paint, and funneling $100 million into protecting at-risk waterfront communities like Coney Island Creek. They've also added sand dunes to Staten Island, updated building and zoning codes, and added 4.15 million cubic yards of sand to city beaches.

Future efforts will include upgrading flood protection systems and coastal protection in at-risk areas like Red Hook and Breezy Point, preparing NYCHA for heavy flooding, ensuring hospitals don't lose electricity during major weather events, and putting $450 million toward constructing levees and the like in Midland Beach and on Staten Island's East Shore.

The scary thing here, though, is that so much of these efforts are meant to protect us from the effects of climate change, and won't actually do much to slow down what is apparently an imminent, relentless, and terrifying alteration to the environment in which we live. The city has pledged to cut greenhouse gas emissions significantly, which will ultimately help future generations if more municipalities in America and around the world follow suit, but that's not happening. This is the overheated, increasingly toxic bed we've made, so, might as well let the sheets strangle us, right?

#climate change
#global warming
#mayor's office
#npcc
#original
Do you know the scoop? Comment below or Send us a Tip