The Civilian Review Complaint Board (CCRB), the city agency that oversees complaints of police brutality, launched a new online mapping feature that allows NYers to see the number of complaints filed against the police, per week and by type. Complaint Activity Maps (or CAM) went live today, and breaks down the data in a number of ways: by complaint type, precinct and by officer.

The system is part of a pivot toward transparency by the CCRB's newly appointed chairman Richard Emery. Emery was appointed by Mayor Bill de Blasio in July and the former civil rights lawyer has since made some bold moves as head of the agency. The CCRB's executive director, Tracy Catapano-Fox, was fired in September and in October, Emery released a report that took a hard look at how the CCRB investigated chokehold cases.

Soon after the new online database was announced by the CCRB, the de Blasio administration announced that CCRB complaints have decreased 26 percent in the second half of 2014, and said in a statement that the decrease is a result of administration efforts to reform NYPD policies.

A CCRB investigator, who asked to remain anonymous because he wasn't authorized to speak publicly, said that while sharing the CCRB's data sharing is a step in the right direction, he sees no "real utility in it."

"I think it's good to promote transparency within the agency and an ability to be outside of the agency looking in," he said. "But aggregating all the data, it is not going to tell us what we don't already know. For example, that the 75th precinct has the most complaints." 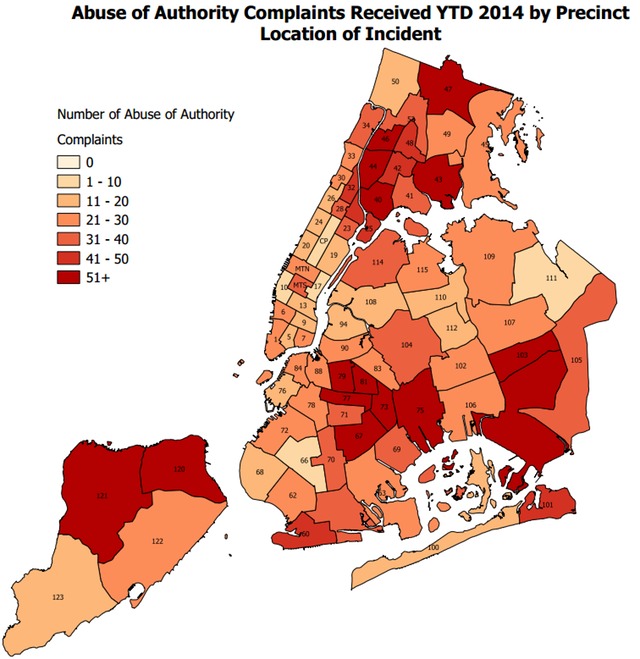 The 75th Precinct, which patrols East New York, is the bright red section on the activity map. East New York is a high crime area; their last CompStat report from November said there were 72 crimes committed in a week. But the number of complaints is highest there too. According to the map, there were 200-249 complaints in 2014, to date. The 75th is where 28-year-old, unarmed Akai Gurley was killed in a housing project stairwell last month, and where, in July, an officer was accused of putting a pregnant woman in an illegal chokehold.

What Emery is doing that makes a difference, the investigator said, is another new feature on the CCRB's website: a "Check Your Complaint Status" form. Previously, if you filed a complaint against an officer, the only way to follow up would be to call, and investigators had strict guidelines of what they could share over the phone.

"If they called, you could only say, 'The investigation is ongoing,'" the investigator said.
"It was always frustrating for me, and then the person thinks they're wasting their time. It prevented them from being an active part of the investigation."

The CCRB investigator said that Emery is also looking to make investigation times shorter, ideally not lasting longer that four months. As it stands, some of the longest cases can stretch up to 14 months; one of the reasons is the struggle to collect evidence. CCRB investigators stay in their offices, and officers and complainants come to them.

Emery is changing that as well. He's assembled an on-the-ground team of four investigators who collect interviews and evidence themselves. This, the investigator said, will decrease the number of "stillborn" cases. According to our source, Emery is also placing an importance on gathering video whenever possible, from security footage or other devices, so that cases can be investigated even with lapsed testimony.

The field team is a novel concept for the CCRB, who hasn't had anything like it, the investigator said.

"Until now we were a reactionary and complaint driven agency," he said. "We were never able to really address the issue of police misconduct. We're sitting in an office and have to wait for people to come to us."

#CCRB
#nypd
#police brutality
#police misconduct
#original
Do you know the scoop? Comment below or Send us a Tip