A recently-opened boutique hotel in Bushwick—BKLYN House: A Bushwick Inspired Hotel—is reportedly serving as a temporary homeless shelter, having contracted out 44 of its 113 rooms to the Department of Homeless Services. The new commercial shelter started operating last November, shortly before Mayor de Blasio pledged to phase out the commercial shelter system "as quickly as possible."

"We have rented out some hotel rooms to temporarily provide a place for homeless individuals to live," Mayoral advisor Lincoln Restler told community members this week, as reported by DNAInfo. "This is not permanent but on a temporary basis."

The hotel, which boasts close proximity to a "flourishing art scene... where provocative street art and fine-art galleries live side by side," offers "a rotating collection of local art" in addition to typical hotel amenities like WiFi, complimentary breakfast, and a concierge service. A rooftop bar is reportedly scheduled to open this summer. Rooms are listed for between $200 and $500 a night.

"When you go to a map and pinpoint where [the hotel] is, it is surrounded by galleries and art spaces in Bushwick and Ridgewood," branding consultant Tara Mastrelli of Studio Tano told reporters earlier this year. "We're really inspired by the stuff going on there, and the street art, and that kind of raw feeling of creativity."

At a City Council meeting in December, then-Department of Homeless Services Commissioner Gilbert Taylor said that each hotel room booked by DHS cost the city about $4,830 per month.

BKLYN House management did not respond to a request for comment on the arrangement. According to DHS, 80 homeless men are currently living at the hotel temporarily, and have been since November 23rd. Their cases are managed by a cluster site administer called BEDCO. 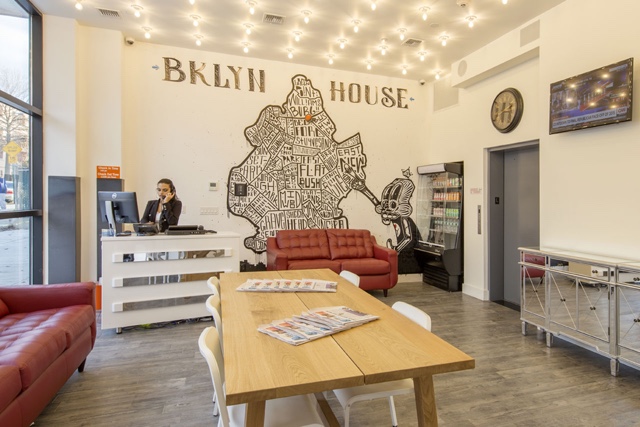 While Mayor de Blasio pledged in February that he would stop using private hotels to house homeless families, no official timeline for that phase out has been announced. "We intend to use hotels [to house the homeless] less and less, and, as quickly as possible, stop using them," the Mayor said at the time. "However, we may have to use them going forward when there is a need."

The mayor's pledge came on the heels of a tragic triple murder inside a hotel-shelter on Staten Island. There are 41 NYC hotels housing homeless New Yorkers—the same as February.

The average homeless New Yorker costs the city, state and federal government $58,000 per year, according to the Supportive Housing Network of New York. Advocates have long argued that the city should channel the money it is spending on the shelter system—which currently serves more than 60,000 New Yorkers—into permanent housing.

"There's no magic bullet here," City College Professor John Krinsky told us in a recent interview. "But with some of the money we spend on homeless shelters, if we use that to subsidize some housing that would be permanently affordable, that could not be speculated on but would remain a permanent part of NYC's affordable housing stock, that would be money much better spent."

“The City has made a public commitment to end the policy during multiple mayoral administrations of using commercial hotels for homeless shelter as we work to prevent homelessness and to transition homeless New Yorkers from shelter to permanent housing. Given the current lack of affordable housing and wages not keeping pace with rent, these changes will require sustained commitment from the City and time."

#BKLYN house
#bushwick
#dhs
#homeless
#homelessness crisis
#Hotel Shelter
Do you know the scoop? Comment below or Send us a Tip