Tenants of a newly built Borough Park luxury building moved in this month before construction was complete, and the residents still don't have gas, according to one resident, who spoke on the condition of anonymity for fear of retribution.

"It’s just super sketchy, and we feel like no one cares and no one’s working on it," the tenant told Gothamist. "No one really cares about what’s going on, and we’re being left in the dark."

The building, dubbed the Hamilton by developer Halcyon Management, takes up the length of a block on Fort Hamilton Parkway between 60th and 61st Street, in a mixed-industrial corner of Borough Park near Sunset Park and Dyker Heights.

The five-story, 92-apartment project sits on the site of a recently demolished factory and one side overlooks a trench where freight trains run alongside the N, which stops two blocks away. Halcyon is run by Yoel Sabel and Lipa Friedman, the pair behind the four-building complex at 101 Bedford Avenue, across from McCarren Park in Williamsburg, which garnered press attention for its lavish amenities, including heated sidewalks and a golf simulator.

The Hamilton comes equipped with a golf simulator too, along with a roof deck, a game room, a gym, and a "business center," among other perks. Studios start at $1,700 a month and three bedrooms are currently listed for as much as $3,700. The development's promotional website reads, "Overlooking Sunset Park — the next hot Brooklyn neighborhood — a new standard in city living is rising. The Hamilton is five stories of luxury brand new, spacious, and well appointed rentals — at prices you just won’t find in Brooklyn anymore." 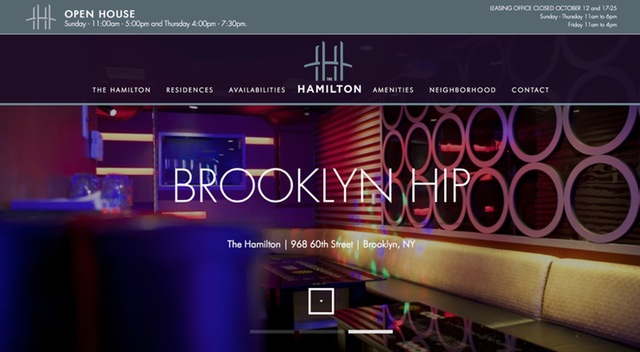 The landing page of The Hamilton's website. The interior photo seems to be borrowed from a karaoke bar next door. (The Hamilton)

The trouble, according to the tenant we spoke to, started when the management company failed to respond to her requests to sign a lease after her application had been approved, so that she could move in October 1st. She had looked at an apartment weeks beforehand, with construction still in full swing, and put a deposit down. It turned out, management informed her as the beginning of October approached, that the building still lacked a certificate of occupancy. Brokers she was working with claimed to be surprised by this news, but said these types of issues are common in new construction buildings, and ultimately Halcyon would do right by her.

The tenant pressed and got the management company to agree to reimburse her for each day she couldn't move into the apartment (she says she has not heard more about this since the agreement).

The next hiccup came when, as she headed to the management office to sign her lease near the end of the first week of October, Halcyon emailed her to say that the building had no hot water. Emails from two other tenants that she shared with Gothamist state that no one from Halcyon mentioned the lack of hot water at the signing to them, either. The problem, a Halcyon rep wrote to the tenant after the signing, would be fixed by the following morning. The next shock came when the tenant went to move in. As she wrote in an email to Gothamist:

I strolled through the building only to find that the hallways were a disaster, the laundry room that I was told would be ready upon move-in had trash, water and dirt on the floor, and a table saw in the middle of the room. The stairs were blocked with cardboard and tape, and there were holes in the ceilings, trash bags in the hallways, and exposed wires hanging from walls and ceilings.

Did I mention we have no gas either? 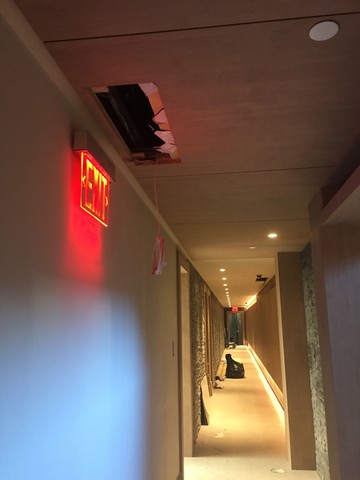 Tenants moved in on October 7th, the day Buildings Department records show the agency actually issued a temporary certificate of occupancy, ostensibly a stopgap until the building is completed. A spokeswoman for Halcyon, Linda Alexander, provided a signed TCO authorization form dated the 7th. She said that that day, a Friday, the DOB agreed to issue a TCO but didn't formally do so until the next business day, which was the 11th, after Columbus Day.

A DOB spokesman said that the building could not legally be occupied until the 11th.

About 17 apartments have been rented in the building so far, according to Alexander. Since the move-ins began on October 7th, management has provided hotplates and space heaters, but has only responded sporadically to requests for information, the tenant said. In each email announcement, Halcyon has purportedly told tenants that services would begin within a day or two. The problem has been exacerbated by the Jewish High Holy Days and the holiday period of Sukkot, during which the company's leasing office has been closed.

"When I first moved in and they said there was no heat or hot water, I said, 'Okay, I can probably deal with that," the tenant said. "But now it’s been 13 or 14 days."

For the interim, the tenant said, "I try not to be home as much as possible. I stay at work as much of the day as I can."

Even after the washers and dryers were hooked up, they were all but useless, she said, because the dryers run on gas, and the washing machines need a water heater to operate on anything but the cold setting.

Finishing construction work is ongoing, but things could be starting to look up, the tenant said. Late yesterday, hot water started flowing out of the taps. Alexander, the landlord's spokeswoman, said that cooking gas is also on, but the tenant said that is the first she has heard of it.

Alexander said that the only work left to do is attaching railings and putting furniture on the roof deck.

The botched move-in is the latest in a series of bumps in the property's transformation into The Hamilton. The DOB has cited contractors five times since 2009 for work at the property, including two citations that carried fines totaling $10,800, records show. The violations include one classified "aggravated," for an un-permitted sidewalk shed with improperly insulated wiring; three for work outside the scope of permits; and one for tearing down a stop-work order. People have also lodged a litany of complaints with the DOB about construction, including twice about material allegedly falling from the site. One of those times, in 2014, a steel beam fell, according to the complainant. 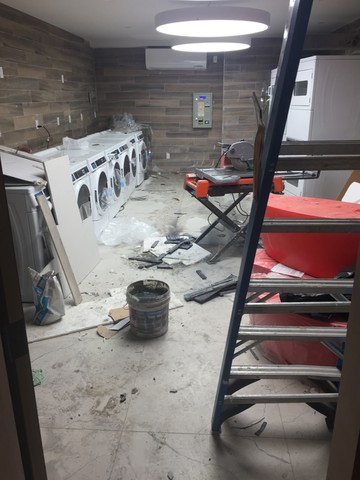 What the laundry room looked like as tenants were moving in, according to one we spoke to. (Gothamist)

The building is also not registered with the Department of Housing Preservation and Development, according to records, something that is required of all non-owner-occupied residential buildings with more than three units. Violations of this rule can carry fines of $250-$500. Alexander said that Halcyon is in the process of registering.

Alexander said that Sabel emphatically denies pressuring tenants to move in, adding that he had allowed them to move their furniture in before the issuance of the TCO. She said that National Grid came on October 7th, but could not connect the gas for reasons Sabel doesn't know, and delayed coming back, when Halcyon expected them imminently. The problem, she said, is with the utility company.

A National Grid spokeswoman said that when workers for the company were scheduled to activate the gas, the company's work on the gas main and service lines was not yet complete. She said that the hot water is now activated, but contrary to the landlord's claim, the meters for the other gas equipment have not yet been turned on. The company and the owner have scheduled an appointment to turn on the rest of the gas, the spokeswoman said.

Alexander said that Halcyon has offered to prorate tenants' rent for each day that they lived in the building without gas, but not for the time that they couldn't move in between the 1st and the 7th. The provision of basic services such as utilities is part of what's called the warranty of habitability, which in New York can be a tenant's defense against being sued for nonpayment of rent. The tenant we talked to said that at no point in her communication with Halcyon has the company offered to prorate her rent.

Listings on popular real estate websites including StreetEasy and Zillow make no mention of the building's problems.

Of course, this isn't the first time a developer has angered tenants when presenting a new building as move-in ready without fully disclosing problems. In September, an allegedly luxurious building in Clinton Hill welcomed tenants despite lacking a certificate of occupancy, finished balconies, an advertised roof deck and courtyard, and in some instances, walls that tenants said they'd been promised. The building, 10 Lexington Avenue, has since gotten a temporary C of O, and a resident reports that, though there are still exposed wires and unfinished balconies, improvements are being made. 120 South Fourth Street in Williamsburg, where some tenants signed leases back in 2013 before their apartments had any walls, remains evacuated nearly a year after building inspectors forced residents out when inspectors conducting an audit—the department had previously signed off on the building—discovered 3,000 square feet of structural framing and concrete floor had been built without permits.

The aggrieved tenant at The Hamilton said that the silver lining in all of this is the low cost of her apartment. "It is a benefit of living in Sunset Park, because no one wants to live here," she said.

Granting a little license on her neighborhood boundaries—the city doesn't have official ones anyway—the notion that Sunset Park is undesirable is, let's say, debatable, as the construction of The Hamilton seems to attest.

Updated at 5:55 p.m. to include information provided by National Grid.