A Republican State Assemblyman from Staten Island is planning to introduce legislation, called the "Blue Lives Matter" bill, that would make assaulting a police officer akin to a hate crime. The bill, Assemblyman Ron Castorina says, is intended to "promote peaceful assembly at protests" across the state, apparently by compelling civilians to think twice before "causing chaos."

"We want to protect police officers by making the public pause before they would throw a bottle or a rock or a punch," Castorina told us Wednesday, en route to a press conference to announce the bill on Staten Island. The law would make assault on an on-duty cop, currently a Class C Felony, a Class B Felony. Aggravated assault, defined as assault with intent to cause "serious harm," would be elevated to the maximum Class A, punishable by up to 30 years in prison.

Under current law, hate crime status can only be applied to cases in which a person is attacked based on their race, gender, national origin, sexual orientation, age, or disability status. But just last week, Louisiana enacted a similar "Blue Lives Matter" bill, elevating violence against police officers and firefighters to a hate crime. "It appears there's a movement across the country," Castorina said.

Recent FBI and Bureau of Justice statistics show that police fatalities and murders, as well as assaults against cops and police officer injuries on duty, have been on the decline for decades in the US.

But Castorina says that his legislation was inspired by what he perceives to be an uptick in assaults and attacks: the killings of Officers Ramos and Liu while they sat in their patrol car in Bed-Stuy in December 2014, and, more recently, the killings of uniformed officers during a Black Lives Matter protest in Dallas, and in a Baton Rouge parking lot.

"The notion is that police officers have been targeted just because they happen to be police officers," Castorina said. He also referenced an NYPD officer who was attacked with a hatchet in Queens last May, and a Black Lives Matter protester who was arrested during an anti-police brutality march last April after allegedly assaulting a plainclothes officer. (The same officer then drew his firearm and pointed it into a crowd of protesters.)

A civilian who kills a police officer already faces heightened penalties. When seven people were accused of assaulting two NYPD lieutenants on Brooklyn Bridge during a December 2014 march for Eric Garner, the police posted a $25,000 reward for information on their whereabouts. By contrast, Peter Liang, the first NYPD officer to be found guilty of killing a civilian in decades, is serving probation rather than prison time.

"With those terrible acts of terror [against police officers], there was accountability," said Brooklyn Councilmember Jumaane Williams on Thursday, challenging the proposed legislation. "Many of us don't think the same things happen for black people who are killed. That's why saying 'Blue Lives Matter' is redundant." 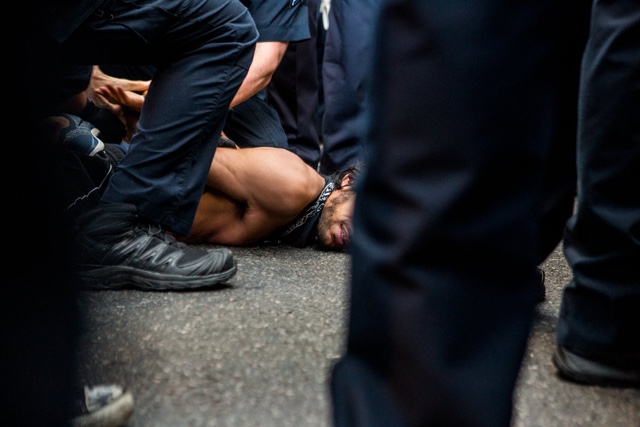 According to Castorina—who, it's worth noting, recently referred to abortion as "African-American genocide"—the legislation does not raise questions of racial inequality. "We have a very diverse police force in NYC, including men and women of color, so I don't see how this is a racial issue at all unless you are looking at this through a leftist prism of race, which is completely unnecessary," he said.

"The use of 'Blue Lives Matter' is racialized, because it's in direct response to 'Black Lives Matter,'" Williams countered.

NYC Republican Councilmember Joe Borelli, who is planning to enter a resolution at the city level supporting the "Blue Lives Matter" bill (he's also a support of Donald Trump), said this week that the legislation wouldn't increase tension between police and the civilians they serve.

"Look, there is a national problem with the police and community relationship," he said. "We can't not acknowledge that. But we're not taking anything away from anyone else's positions, motivations, or beliefs with this bill. We're simply saying that police officers—as we've seen anecdotally for a number of years, and now we're seeing in increasing actuality—are deserving to be a protected class."

"I tell people, during protests, don't put your pinky on a cop," he said. "In that context, it's the cop's word against the resident, and if there's no video [evidence], the cop's word goes."