New Bill to Put an End to Urban Stunts? 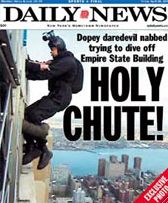 Earlier this year Queens Council Member Peter Vallone Jr. introduced a bill that would make it illegal to jump or climb a building (monument, statue, crane and bridge) 25-feet or taller. Yesterday the City Council unveiled bill No. 721, which The NY Times is calling the "anti-Spidey law."

Following Alain Robert and Renaldo Clarke's climbs of the NY Times building earlier this month, the city is on edge over stunts. The Times notes that the daredevils "shut down entire blocks, tie up dozens of police officers and risk the safety of bystanders below." A week after the climbs, a grand jury rejected criminal charges against Robert; it is difficult to punish anyone for climbing a building under current city laws. The most he could get now is 15 days in jail and a fine for disorderly conduct. If Vallone's bill passes, future climbers and jumpers could get up to a year in behind bars and a steeper fine of up to $1,000. Some question the new proposed penalties, however.

Jeb Corliss, who attempted to jump off the Empire State Building in 2006 and is still feeling the legal repercussions, told us yesterday that "It always amazes me how people try to destroy what they can't understand. I think if they could cut the wings off all the birds in the city they probably would." He added that parachutes, like the one he was wearing on top of the ESB, are there to save human lives, not hurt them. "Parachutes are a very real and viable way to save human life in the case of a catastrophic emergency. We have already seen what happens when people are faced with the option of burning or jumping. With a parachute these people would at least have had a chance. It's time to start looking to modern technology to help protect people who work in high rise buildings. Base jumpers from all over the world have proven that parachutes can be used to get down from the roofs of buildings in a very safe way."