New Bill Should Be Putting Plastic in the Past 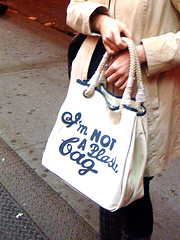 Not everyone got an over-hyped "I'm Not A Plastic Bag" when it hit Whole Foods last year, so the powers that be had to step in and put an end to the bag's nemesis: The Plastic Bag!

Yesterday, the City Council passed a bill, 44 to 2, requiring stores over 5,000 square-feet to offer recycling for plastic bags, as well as have bins where bags can be returned. And on the plastic bags stores give to customers, which will contain in large print the following text: "Please return this bag to a participating store for recycling.”

Mayor Bloomberg is expected to approve the bill, which was proposed last October. Other components of the bill include reports from the Department of Sanitation every two years (beginning in 2012) on how successful the program is. Two thousand stores will initially participate, and if they do not comply they are at risk of getting fined ($300 per day).

The two opposing votes were from Republicans Vincent Ignizio and Dennis Gallagher (there were also five absences). City Council Speaker Christine Quinn pointed out that the program won't affect businesses cost-wise because they are able to sell bags to recycling businesses, making around $100 per ton of plastic bags which are later turned into plastic furniture.

What about the global campaign banning plastic bags all together? We suggest you get your own reusable ones, our favorites are Envirosax and MinusBags. Less design-y options are: Baggu, Port & Company's plain canvas bag and ChicoBags.