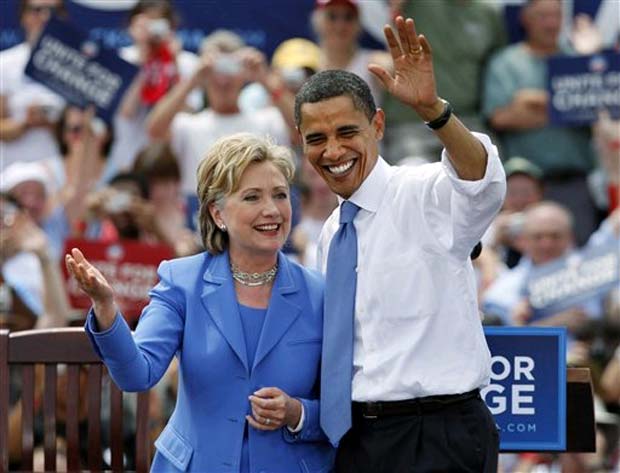 Photograph of Hillary Clinton and Barack Obama in Unity, NH by Elise Amendola/AP

Former rivals Senators Barack Obama and Hillary Clinton made their first joint appearance yesterday in New Hampshire, to kick off the Democrats' campaign for the White House. They put reports of bitter tensions and resentments between their campaigns behind them and Democratic presidential contender Obama praised Clinton and her husband, “I’ve admired her as a leader, I’ve learned from her as a candidate, I am proud to call her my friend and I know how much we’ll need both Hillary Clinton and Bill Clinton as a party and a country in the months and years to come.”

The NY Times noted that the event was "heavily choreographed"--"held on the grounds of an old elementary school, adjoined by fields of wildflowers"--and the town's name was also handy, as Clinton said, "Unity is not only a beautiful place, as we can see, it’s a wonderful feeling, isn’t it?" And when one spectator yelled that Hillary "rocks," Obama said, “She rocks...That’s the point I’m trying to make.”

Newsweek's Howard Fineman found the whole affair a "nice piece of pageantry," and also noticed, "Before the event, Clinton drew a few boos from the crowd. By the time it was over, the whole audience seemed to be cheering for both of them with equal vigor." Still, Obama and Clinton will probably be working on how they help each other--Obama with Clinton's debt, Clinton with her and husband's stump support-- in the near future. And you can see the video of their entire event after the jump.

#barack obama
#election 2008
#hillary clinton
#politics
#unity
Do you know the scoop? Comment below or Send us a Tip