When Governor Andrew Cuomo signed legislation on Friday instating fines of $1,000 to $7,500 for New Yorkers who advertise their entire apartment on short-term rental websites, Airbnb jumped into action. The international home sharing platform valued at $30 billion employs a team of so-called "mobilizers" who contact platform hosts whenever Airbnb-related legislation passes at the city or state level.

"Our mobilizing team is the first to reach out to hosts and make sure they know what's going on," Airbnb spokesman Christopher Nulty told us on Wednesday, during a protest against the new law outside Governor Cuomo's Manhattan office on Third Avenue.

But Airbnb's interpretation of the new legislation differs significantly from that of the law's author, Assemblywoman Linda Rosenthal.

In the wake of Friday's signing, Airbnb has argued that working class renters will bear the brunt of this latest regulation—a now familiar argument. "New York law fails to distinguish between everyday New Yorkers who occasionally share their home and commercial operators who remove permanent housing from the market," Airbnb Spokesman Peter Schottenfels said in a statement.

Renting out an entire apartment for a stay shorter than 30 days was against the law for most New York City hosts well before Cuomo signed legislation specifically banning the advertisement of such units last week. But the law has done little to dissuade New York City hosts from advertising short term stays—a recent data dump from Airbnb revealed that over half of NYC Airbnb users advertise this way. There are 39,553 listings city-wide as of October 1st, according to Inside Airbnb.

According to Rosenthal and State Senator Liz Krueger, the Mayor's Office of Special Enforcement (OSE) will primarily prosecute commercial operators who use Airbnb to convert multiple apartments into rotating short-stay rentals for tourists. Listings will be investigated on a complaint basis, according to the mayor's office, meaning the city will not comb through the site and weed out all offenders.

"The Office of Special Enforcement understands what their goal is," Rosenthal said. "They weren't set up to pick off individual tenants."

Standing alongside the pro-Airbnb group on Wednesday, a group of counter-protesters organized by Rosenthal attempted to drown out the opposition with chants of, "Houses are not hotels!"

The OSE was founded in 2006 under then-mayor Bloomberg, to shut down brothels and illegal clubs as well as apartment buildings converted into illegal hotels. Vito Mustaciuolo, Deputy Commissioner of Enforcement at the NYC Housing Preservation and Development, testified last year that "the problem of illegal hotel rentals is not homogenous. We support the overarching goal to deter the most egregious offenders."

Airbnb has been eager to paint the casual law-breakers as victims, Rosenthal and Krueger argue, to challenge regulations that threaten the company's bottom line. A recent FiveThirtyEight analysis found that a third of Airbnb's revenue between June 2015 and May 2016 came from the eight percent of hosts who rented entire apartments for more than 180 days out of the year, effectively removing them from the housing market.

Airbnb has countered that it can self-regulate, having recently removed 2,223 listings from its platform over concerns they might be affiliated with illegal hotel operators. According to the company, 95% of NYC hosts have one listing on the platform. 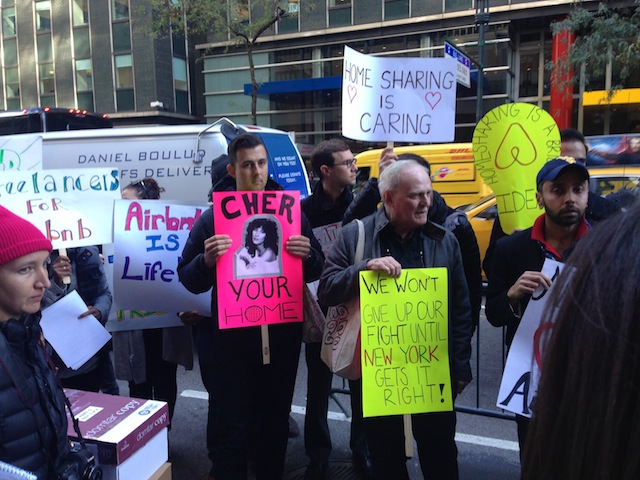 Minister Kirsten John Foy of the National Action Network, Al Sharpton's civil rights advocacy group, roused the pro-Airbnb crowd with a chant of "No Justice, no peace!" on Wednesday, arguing that Airbnb regulations were having an outsized impact on working class communities of color. He predicted that the law would rob working-class New Yorkers of a crucial source of income.

"The way forward is not binding the hand of the middle class and working class who stimulate economic activity and create jobs," he said.

Later, Foy described the fear that has welled up since Cuomo signed the advertising law. "It's created confusion, it's created apprehension, it's created fear in people," he said. "To make communities of color fear severe fines for opening their homes to people, it's just unconscionable."

A woman named Opal, one of the hosts to take the pro-Airbnb bullhorn on Wednesday, said she uses the platform to rent out an apartment in her Harlem brownstone. "I've lived in Harlem for decades. I share my home with guests from around the world," she said, adding, "Laws like this harm responsible people who are sharing their homes occasionally."

"That is something Airbnb is ginning up," Rosenthal said. "I'd like to see how many tenants who do this illegally have been prosecuted for it. What we're after are the commercial operators."

"We'd prefer that hosts didn't break the law," she added.

But Opal was confused by the selective enforcement explanation. "I can't tell a judge, 'Oh I thought they weren't going to enforce it against people like me,'" she said.

William Aronin, a housing attorney who represents landlords and tenants, was also skeptical. "The law is specifically written so they can go after any hosts," he said. "They may not go after everyone with a sledgehammer, but they have to go after everyone for it work."

"We are taking the steps necessary to enforce the law," said City Hall Spokeswoman Melissa Grace. "We take on operators of illegal hotels who put people in unsafe conditions and displace affordable homes."

Airbnb has filed a lawsuit against the city on the grounds that the latest regulation violates the First and Fourteenth Amendments and the federal Communications Decency Act, which can protect websites from legal accountability for third-party content published on their sites. NYC will not begin enforcing the new law until the judge decides on Airbnb's request for a preliminary injunction.

#airbnb
#airbnb advertisements
#enforcement
#illegal
#original
Do you know the scoop? Comment below or Send us a Tip