Never Forget To Smile For Selfies At The 9/11 Memorial

The 9/11 Memorial opened in 2011, but I hadn't seen it firsthand until this past New Year's Eve, when I passed through on my way to a party in Battery Park City. It was a few hours before midnight and the memorial was all but deserted by this time, except for two bros taking photos of themselves in front of one of the reflecting pools. "Say cheese!" one bro cheerily exclaimed, as the other smiled broadly for a commemorative photo at the site where nearly 3,000 people were killed. Happy Puking New Year.

Yesterday, Downtown Express took a closer look at the photographic habits of Ground Zero tourists, and in just one hour at the memorial reporter Dusica Sue Malesevic counted 14 selfie sticks in use or at the ready. Her article asks:

Is taking smiling selfies at the 9/11 Memorial appropriate considering what the site is supposed to commemorate?

For Michael Burke, who lost his brother, Captain William Burke of Engine 21, on Sept. 11, there is nothing at the site to remind people of the attacks. Physical reminders, such as Koenig‘s “Sphere” that was once at the plaza in front of the World Trade Center, are not at the site.

"You’re denied the opportunity to confront the attacks where they happened,” Burke said in a phone interview. “What the memorial has inspired is not somber reflection, remembrance — it’s happy selfies.”

But criticizing the memorial's aesthetics, while certainly fair, shifts too much blame away from those who somehow don't get why it's so tasteless to pose for smiling photos in front of the names of the dead.

One can never know for sure what's going on in their heads, of course—everyone responds to grief in different ways, and it's certainly possible the selfie-takers are remembering a lost loved one with a smile. It's also possible they're just inconsiderate assholes.

The problem, as always, starts with young people. My guess is that many of the cheerful visitors smiling for photos at Ground Zero are simply too young to have really felt the horror of 9/11, and they have no idea how profoundly grave the days and months that followed were for New York City residents. (It's also possible some of them are foreign tourists for whom 9/11 doesn't carry the same weight.)

They didn't watch the towers burn and collapse in real time, or smell the smoke trailing from the open pit in lower Manhattan for weeks, or wander through the labyrinthine candlelit shrines for the missing and the dead in Union Square. The horror, for them, was presented packaged and contextualized by media, like a polished foreign artifact served on a commemorative cheese plate. Hashtag Waterfall!

The other factor here, obviously, is the way our lives have become inextricably hardwired into social media—and this afflicts people of all ages. No important experience is truly valid until it is documented and shared with our social networks. Because of our obsessive need to document, all moments deemed noteworthy are encountered obliquely, with the self-imposed distance of a spectator.

Noteworthy moments that contain anything uncomfortable are held at an even greater arm's length. When confronted with trauma, many of us instinctively grab the nearest distraction, which is already in our hand, or at the end of a stick. Take a picture and move on, walking with head bowed as you try different filters.

It goes without saying that many of us lack the tools or even the words to articulate profound trauma. One tourist from California was recently heard in Times Square remarking that he "went to 9/11," meaning the memorial.

It's easy for a NYC resident to forget that through the eyes of the tourist, no trip to New York City is complete without a visit to 9/11. Ya' gotta do 9/11. You can do the whole thing in like two hours in between the Statue of Liberty and the Beast Speedboat! Tickets to 9/11 ain't cheap, but you can knock out all of your Christmas shopping in the gift shop.

The beaming insensitivity captured in these selfies is not entirely the subjects' fault—like everything else in America, the 9/11 "experience" was immediately commodified. Within two days of the attack I saw a man outside the Sixth Avenue Barnes & Noble hawking T-shirts with an illustration of the burning towers and the words, in all caps, "I CAN'T BELIEVE I GOT OUT."

Still, it's jarring for anyone caught in the dark madness of those days to understand how someone could grin while visiting that vortex of carnage.

My New Year began with a surge of nausea, followed by a pang of regret for not grabbing that camera and throwing it into the reflecting pool. This would also be wrong (seriously, please stop throwing crap into the reflecting pools). And since when did I become the Selfie Police? I don't know, but here I am, a reluctant self-deputized selfie scold. Take photos at the 9/11 Memorial, but please stop smiling like you're on a class trip to Niagara Falls.

Despite what the museum's admission fee and the tchotchkes in the gift shop would lead you to believe, this is not just another notch on your sightseeing belt. Ask yourself, person who's probably not even reading this: would you smile for a selfie at a loved one's grave? Some extremely fucked up shit happened here and it still hurts, and for that reason your happiness looks too much like disrespect. 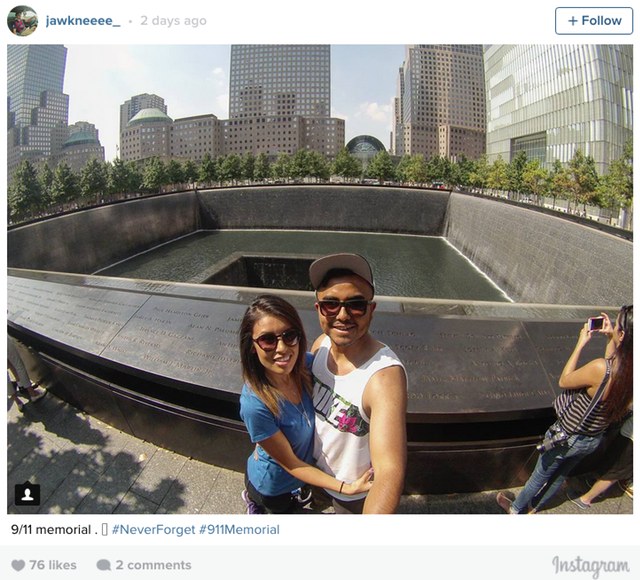 #9/11
#9/11 memorial
#selfie sticks
#selfies
#original
Do you know the scoop? Comment below or Send us a Tip