Brooklyn Heights residents met with the deputy inspector of the NYPD's 84th Precinct on Tuesday night to discuss the recent shutdowns of Pier 2 in Brooklyn Bridge Park. Police say the closures were prompted by fights or large gatherings planned on Facebook, and neighbors who live near the park say the basketball courts are to blame, attracting teenagers from local high schools.

"It's becoming a very volatile and tense situation," Linda de Rosa, Vice President of the Willowtown Association, a neighborhood civic group, told us Tuesday. "They get rowdy and loud and neighbors are a little unsettled by it."

Residents of Joralemon Street—a treelined stretch that connects park visitors directly to the waterfront—have demanded that the Brooklyn Bridge Park Corporation and NYPD take every available measure to discourage fighting in the park and surrounding neighborhood, including street closures.

"You've had a flood of kids surging through Joralemon Street," said Peter Bray, president of the Brooklyn Heights Association, the self-proclaimed oldest neighborhood group in NYC. "You have residents who have been jostled and essentially forced off the sidewalk."

"If you're a resident of Joralemon Street, the whole character of your block, of that area, has changed," Bray added. "And not for the better."

Steve Rothman, a Joralemon Street resident, recently set up a surveillance camera to document "the trauma."

"There's been menacing, threats," he said. "I saw a woman hit in the head with a basketball. So nothing over the top, but nothing good." 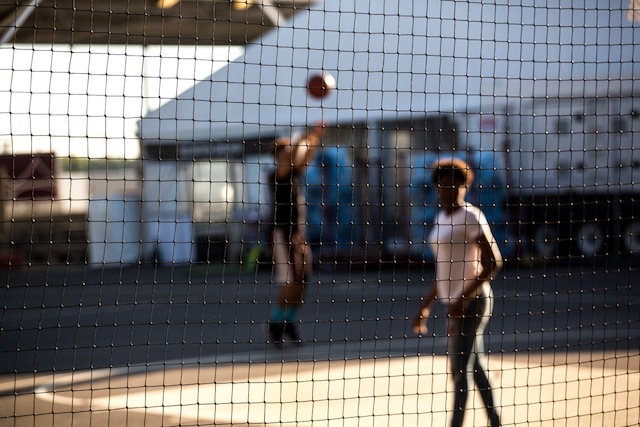 Pier 2, a two-acre flattop with basketball and handball courts and a rollerskating rink, has been closed five times since mid-April, according to the NYPD and BBPC.

The NYPD says two of the shutdowns have been prompted by fighting between teenagers, while the rest have been preventative.

"Either there were groups fighting on those days, or there was anticipation of a large group fight," a spokesperson for the department said Tuesday. No guns or knives have been recovered in the incidents.

"I didn't like what I was seeing [on Facebook], and I made a decision to close the park before it could even get to that point," Deputy Inspector Sergio Centa said on Tuesday, of the first closure in mid-April.

The pier was closed most recently last Thursday, after alleged fighting on Tuesday. "I can't take the chance of the groups coming back and settling the score," Inspector Centa added.

Some of the closures were prompted by a Facebook event titled Brooklyn Bridge Park, scheduled for the public school spring break week from April 25th to April 29th. The description for that event reads:

Inspector Centa declined to elaborate on the types of posts that merit a shutdown. "I'm going to keep that under my hat," he said.

Many of the teenagers and young adults we spoke to this week who come to Pier 2 said that there has been some fighting in the park. "Some people come down here to practice, work out," said Latene Matthews, a 20-year-old college student, on Monday. "Sometimes other people come down here just to make trouble."

"It's a good thing, they keep everything in check," one student who declined to give his name, said of the police presence. "The cops make sure there's no fighting."

A recent Facebook post mentions last night's meeting and threats of more cops and shutdowns. "PLEASE TO ALL PEOPLE THAT GO TO BBP . NO MORE FUCKING FIGHTING," it reads.

"It's bad that people fight, but we all get to hang out and meet new people," said Kahliyah Brown, 17, a student at Brooklyn High School of the Arts. "The amount of cops that come here, they pressure us and make us feel a little unsafe rather than protected." 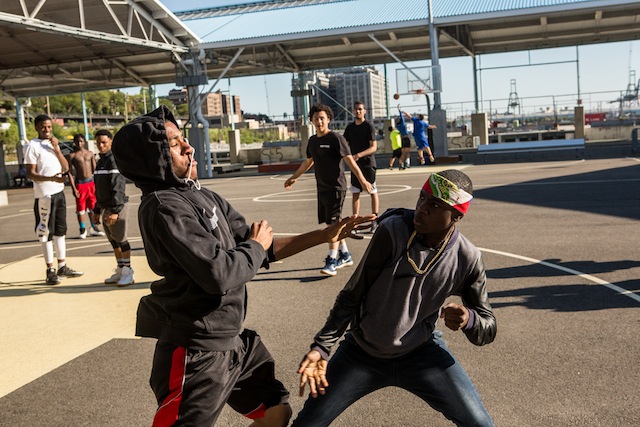 Mario Ramirez (back center) said cops sometimes confuse their friendly sparring for something more serious. "Sometimes there's an argument when you play basketball and they're quick to judge," he said. (Scott Heins / Gothamist) 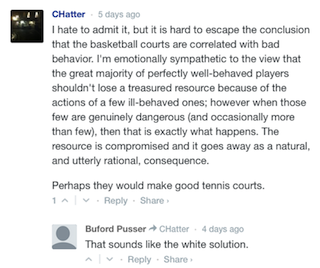 Comments on a recent Brooklyn Heights Blog post (via).

There has been one arrest related to fighting on Pier 2 since April, according to Inspector Centa—an alleged assault on Fulton Street, after a closure. One person has been hospitalized. Last Wednesday, police reported teenagers fighting with sticks and bottles.

"It's just kids coming from all over the city," Centa said. "If you get enough people in one area, you're going to get people who don't like each other."

Some Brooklyn Heights residents have drawn their own conclusions, speculating and citing second-hand stories. Many have referenced the reports of gunshots being fired in Pier 2 last spring, and said that recent events are proof of a worsening situation.

"They are having to close it because of gang wars or whatever," said Craig Bowles, 53, a Brooklyn Heights resident. "It's probably something like the gang in Red Hook versus the gang in Vinegar Hill."

"I think most people [on the courts] are from the surrounding areas," he added. "They're probably playing basketball because they don't have jobs."

The NYPD and BBPC say they are taking steps to prevent fighting and manage the flow of foot traffic on Joralemon Street. The 84th's park detail will have 25 officers this summer, up from just two dedicated cops on Pier 2 in 2015. The police are constantly monitoring social media, and Inspector Centa said that in the case of another closure, he may begin to divert some crowds from the park to Atlantic Avenue, rather than letting everyone exit via Joralemon.

"I can't shut down the street just because a lot of people are using it," Centa clarified. "But if you're going to come down and cause problems... then we're going to make that park difficult for you to go to. If [shutting down the Pier] prevents people from... destroying the neighborhood, I'll do it again."

"Brooklyn Bridge Park has become a destination for millions from across the city, and we cannot allow the actions of a few to affect the enjoyment of this wonderful amenity," Belinda Cape, a park spokesperson, said in a statement. "Together, Borough President Adams, NYPD and BBP are actively working on a Pier 2 action plan to ensure that the park and the surrounding neighborhoods are safe for residents and visitors."

De Rosa of the Willowtown Association said the Park could do more. "Maybe something like miniature golf where there's not so much open space for kids to hang out," she said. Her group is also petitioning to close Joralemon Street to car traffic and use signage to redirect foot traffic to Atlantic Avenue.

"We are keenly aware of Joralemon Street residents’ concerns and are working with the 84th Precinct and Borough President Adams to address them," Cape said.

Other solutions posted in the comment sections on local blogs, and voiced on Tuesday, were more off-the-cuff and extreme. "Pier 2 should probably no longer be basketball courts... considering the types of people it seems to attract," wrote one anonymous commenter.

If the park were all grass, Bowles suggested, "We'd probably have more laid-back crowds."

In a particularly tense moment during Tuesday's meeting, notorious gadfly and Heights resident Jeffrey Smith stood up to speak. "Now these mutts are running all over the Heights," he said. "We've got a Heights-wide emergency."

"I'm getting in my goddamn car, I'm going Upstate, I'm going to get a couple cases of shotguns and hand them out," he told us after the meeting. "Understand?"

"I've been trying to stay away from the demonizing of particular users," said CB 2 District Manager Rob Perris, during a phone interview Tuesday. "But Smorgasburg did not ever result in gunfire, and we did have gunfire on the pier."

"But when people say the solution here is to get rid of the basketball courts, which seems to me to be code for, 'We should make the park unattractive for certain demographics,' that line of reasoning really saddens me." 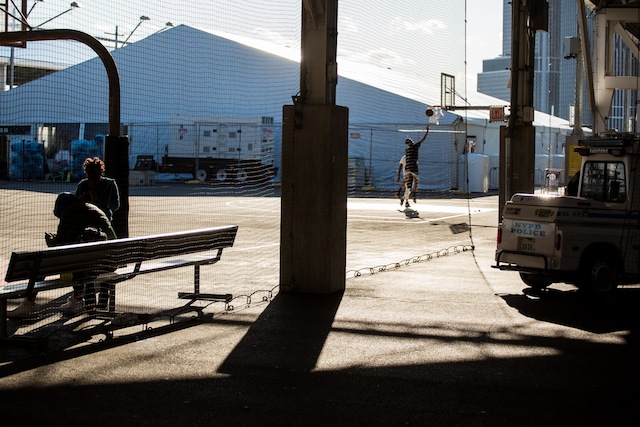 It was warm and sunny on Monday night, and the basketball courts on Pier 2 were full. One NYPD patrol car sat on the south side of the Pier, and five officers clustered nearby.

"Look at the view, man," said a 23-year-old who goes by Kevlove, pointing out over the East River to Manhattan. "It's the best view ever. If the Twin Towers were still standing it'd be even better."

Mario Rivera, 16, told us he likes to come to Pier 2 after school to meet girls. While he's seen fights break out on the pier, he thinks the cops are overreacting.

"Sometimes there's an argument when you play basketball and they're quick to judge," he said. "They think we're fighting. Give us some space, you know?"

Devontae Edwards, 15, Rivera's classmate at Erasmus High School, added that residents contribute to his discomfort. "If they would get along with us that'd be more fine," he said. "But they make us feel like we unstable. We're kids!"

#84th precinct
#brooklyn bridge park
#nimby
#nypd
#pier 2
#shutdown
#longform
#original
Do you know the scoop? Comment below or Send us a Tip